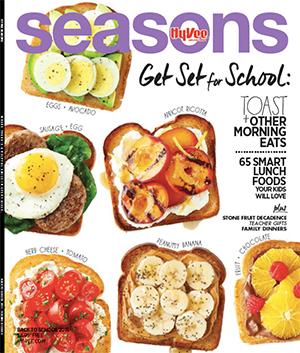 A Promise to Keep

By NoahPosted on August 1, 2015October 19, 2020Cat UncategorizedLeave a comment

IN THE YEARS SINCE A MINNESOTA BOY WAS TAKEN BY CANCER, HIS FATHER HAS HONORED A PLEDGE HE MADE TO HIS SON. THEY SEALED THE PROMISE BY INTERLOCKING PINKY FINGERS. THE LEGACY OF MITCH CHEPOKAS NOW INCLUDES THE HY-VEE PINKY SWEAR KIDS TRIATHLONS. FUNDS RAISED AT THE EVENTS WILL GO TO FAMILIES WHOSE CHILDREN ARE BATTLING THE DEADLY DISEASE OF CANCER.

The day everything started to change in the spring of 2002, Mitch Chepokas was a quirky, fun-loving 8½-year-old looking forward to singing in his school’s end-of-the-year concert. Though his parents describe him as a goofball who loved playing practical jokes, he was also struggling with Marfan’s syndrome, a condition that sapped him of energy and had already required major surgery.

When Mitch collapsed during his concert performance, it was only natural that his family assumed Marfan’s was the culprit. But two weeks later, the truth began to surface. He and his family were sitting on their front porch eating fondue and planning a summer vacation, when Mitch burst into tears. In deep pain, he showed his parents a huge lump on his leg. The memory of that day remains fresh for Steve and Becky Chepokas and their daughter, Melissa, of Chanhassen, Minnesota.

The new diagnosis was osteosarcoma, or bone cancer, and doctors identiﬁed it as Stage IV, the worst level. There was nothing anyone could do. Even with treatment, Mitch might live only 10 months. Steve called the sales promotion and premiums company he owned, and said he wouldn’t be in and didn’t know when he’d return. Over the next 10 months, he and Becky spent 111 nights in the hospital with their son. They never left Mitch alone. During Christmas season that year, Mitch lay in a hospital bed, while Steve sat on a nearby windowsill. They couldn’t help overhearing a tearful conversation in the next room. A boy was asking his parents, “What do you mean there will be no presents?” The family was broke. Every cent had been spent ﬁghting to save their child’s life.

Mitch was distressed by what he heard. “What are we going to do, Dad?” “Nothing,” Steve replied. “We’re going to stay out of their business. It has nothing to do with us.” But Mitch insisted that wasn’t true, and they needed to do something. The boy wanted to know how much he had in savings and asked if he could do whatever he wanted with it. When his father said “yes,” Mitch asked his dad to take him to the bank after he ﬁnished chemo the next afternoon.

So, Mitch withdrew $6,000, his entire savings. He divided the stack of $100 bills, stuffing them into envelopes. On each one he wrote: “I love you, Mitch XOXOXO.” Then he and Steve distributed these Christmas gifts to the kids in the hospital’s pediatric oncology unit and Ronald McDonald House. After delivering the last envelope, Steve and Mitch headed toward the elevator. “Dad,” Mitch said, “that is the most fun I’ve ever had! Let’s do it again next year!” Sadly, Steve replied, “Mitch, you’re probably not going to be here next year.”

Undaunted, Mitch asked his dad to pass out money again, no matter what happened. Steve agreed. Even more, Mitch asked his dad, “Pinky swear with me that you will do this forever.” The father and son linked ﬁngers, and Steve vowed to help kids with cancer as long as he lives. As 2003 arrived, Mitch was tired of being in a wheelchair and worn out from the constant pain of tumors from the soles of his feet to the top of his head. Despite his young age, he told his parents that he was ready to walk on streets of gold in heaven. Bible study, prayer and church were a big part of his life, and his faith assured him eternal life.

But he also longed to be the kid he had been—playing golf, visiting with his grandparents and riding his bike while eating candy. “That was Mitch’s heaven,” said Steve. Fulﬁlling the pinky promise began while Mitch was still in the ﬁght for his life. He and Steve signed papers forming the Miracles for Mitch Foundation. Steve sold his company, the proceeds from the sale buying him time—time to be with his son, then time to apply his business expertise in the nonproﬁt world. In the last months, Steve had hats, shirts, and bumper stickers made asking people to pray for a miracle.

In spring 2003, Mitch passed away. The foundation’s name was changed to Miracles of Mitch, and within months a Miracles Open Golf Tournament was the organization’s ﬁrst major fundraiser. The money raised went to support families of kids with cancer. In 2004, the ﬁrst MiracleKids Triathlon took place. Mitch loved to swim, bike and run around like other kids, so Steve and Becky knew this would be an appropriate family-friendly fundraiser. Becky said, “It puts a smile on my face to be able to be that backbone and support to these families when they feel like they are about to lose everything.”

In 2014, the foundation’s name was changed to the Pinky Swear Foundation. Its executive director, Brian Nelson, gave a snapshot of the stressors involved for families facing childhood cancer:

More than $4.5 million has been raised through Pinky Swear, offering ﬁnancial assistance to hundreds of families whose children bravely battle the ugliness of cancer. The foundation now works in 12 states, and Steve hopes that by 2018 it will be active in 48 states. Steve has assumed the role of chairman emeritus, and he and Becky attend every board meeting. Pinky Swear remains the Chepokas family passion and something they intend to be involved with for the rest of their lives. “Mitch will be in our story forever, as he is in our hearts,” Becky says. “The mission is stronger than ever, and Pinky Swear will transcend Mitch.”

RACING TO HELP OTHERS Hy-Vee has announced that it is partnering with the Pinky Swear Foundation to launch Hy-Vee Pinky Swear Kids Triathlons and 5K Family Runs. These noncompetitive events for kids will promote fitness and raise funds for Mitch’s cause in a number of Hy-Vee markets.

“We are extremely pleased to collaborate with the Pinky Swear Foundation and its commendable efforts in raising funds and awareness for children with cancer,” said Randy Edeker, chairman, CEO and president of Hy-Vee. “Being involved in our communities is a top priority at Hy-Vee. We hope to engage families in fitness, raise funds for those in need and have a little fun in the process.” READY TO RUN Hy-Vee has developed a new website aimed at increasing ﬁtness among children. Visit www.hy-veekidsﬁt.com. The site offers exercise videos featuring online ﬁtness coach Daira. There are games to play, guidance about eating and recipes that will keep kids ﬁ t. There’s also a health and ﬁtness blog aimed at children’s needs.

Take the 5-Week Challenge, which is a fun, at-home program designed for kids and families. The site provides tools to monitor progress in the Challenge, and Hy-Vee dietitians offer meal tips to keep you going strong. Within the program, one day in the week is Family Day so that everyone is motivated to get fit! Participating in the Kids Fit program helps children get ready for Hy-Vee Pinky Swear events.