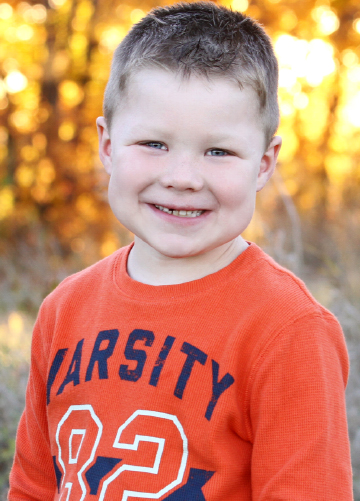 When Austin was sick – which was frequently – Andrea took unpaid time off of work to care for him. With a loss of her income, it made paying those bills extra challenging.

Three-year-old Austin was your typical happy, energetic little boy who loved playing with tractors and getting as dirty as possible – what most people would consider “normal.”

Then out of nowhere, Austin was no longer himself. He had no energy, slept a lot, didn’t want to play with his toys, had high fevers, looked super pale, and cried in pain when walked because his leg bones ached. On Wednesday, February 8th, 2012 Austin’s family ventured down to the Oncology Clinic at Children’s Hospital in Minneapolis.

Austin’s mom, Andrea, admitted she was unsure exactly what the word ‘oncology’ meant. Even after walking into the clinic seeing kids with no hair, playing, she still had no idea where they were or the journey they were about to face.

The doctor sat down and asked if they knew why they were there. Andrea responded, “Yes, to run more tests to see what’s wrong with Austin.” He said yes, but that they already knew. The doctor gently placed his hand on Andrea’s knee, stared her in the eyes and said, “Your son, Austin, has leukemia.”

His diagnosis was a blood cancer called Acute Lymphoblastic Leukemia (ALL). Austin was no longer what they considered to be a normal little boy but instead was starting the biggest battle ever.

And Austin fought for his life: He endured 1,160 days of chemotherapy, over 150 needle pokes, numerous ER visits due to fevers, thousands of pills, four pairs of leg braces due to the side-effects of chemo, daily body pains, high anxiety, hair loss due to chemo – and the list goes on and on.

Cancer isn’t exactly cheap, and unfortunately, insurance doesn’t cover everything. Every time Austin had a doctor appointment, ER visit, physical therapy appointment, psychology appointment, prescription, chemo infusion, x-ray (and so much more), a medical bill arrived in their mailbox. Not only did his family receive a crazy amount of bills, but they also suffered financially due to Austin’s treatment. When Austin was sick – which was frequently – Andrea took unpaid time off of work to care for him. With a loss of her income, it made paying those bills extra challenging.

Pinky Swear Foundation stepped in and helped Austin’s family with mortgage, auto and daycare payments, and gas gift cards to help get to and from Austin’s appointments. They also hosted an All-Star Weekend where the family could get away to try and forget about cancer for a weekend. The boys enjoyed hotel beds full of toys, and gift cards to spend at Mall of America. It was a weekend filled with many treasured moments, and created priceless memories for Austin's entire family.

After a very long and hard three-year battle, Austin completed treatment on April 13th, 2015, at the age of 6. He has been off of chemotherapy since, and Andrea reports he is doing absolutely fabulous.