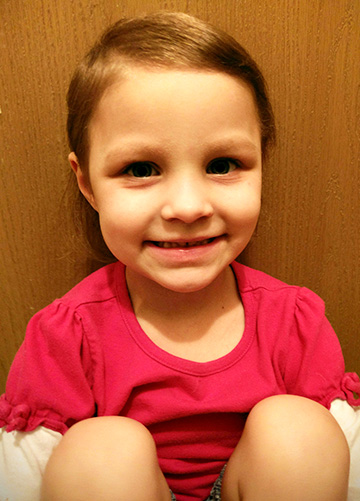 “Cancer is something you hear about all the time but you never expect to personally deal with it - especially with your child."

Abriella is the youngest of six children in her family, and a healthy baby who had only been to the doctor twice outside of her regular well baby checkups. Mom and dad both worked full time, making just enough money to get the bills paid.

Her mom, Megan, picked Abriella up from daycare one day and she had an unexplained black eye. They noticed she had been a little crabby and more tired the week prior. Her mom took her into the ER on a day off later that week because Abriella continued to be irritable, and her eye was not healing as quickly as it should have been.

“I worked as a Certified Nursing Assistant and have seen elderly people heal bruises faster than Abriella was, so I was concerned," commented Megan. “That was the day our lives came to a crashing halt.”

The pediatrician ordered some routine lab tests, and they came back abnormal. Megan received a call to go to Children's Hospital in Omaha to be admitted as soon as possible.

“I will never forget the nurse coming in and telling us, ‘Your child has cancer,’” said Megan. “For a moment it was like the world stopped. It was like living in the worst nightmare imaginable.”

That same day, Megan quit her job, creating a loss of almost half their income. They initially spent over three weeks inpatient receiving treatment before Abriella was released to come home. Three months later, they were inpatient for another five days, then again six months later for another two weeks for an unknown virus. Abriella had turned two years old just prior to being diagnosed, and finished treatment four months after her 4th birthday.

“Cancer is something you hear about all the time but you never expect to personally deal with it - especially with your child. I remember Abriella sitting between us in the chair. I was unable to hold back emotions, but she didn’t have any idea what was going on and why we were upset.”

Losing half of the household income was also devastating. They struggled every month to stay afloat, even after eliminating every expense possible. Pinky Swear was able to help Abriella’s family with an Envelope Grant for a rent payment.

“It was a very crazy 13 months for our family. We had talked about me returning to work but the thought of her being in daycare around potentially sick kids and compromising her health was too risky,” reported Megan. “The unknown with unexpected trips to the ER and frequent doctors’ visits would also have made it difficult.”

Abriella’s family is so thankful that, despite bumps in the road along the way, Abriella has completed treatment and is doing very well. She is a very strong and brave little girl! But she is still trying to get back on track to a normal immune system and catch up on the growth charts.

“We have met some amazing people along our journey and are so thankful for organizations such as Pinky Swear that understand how much cancer families struggle,” remarked Megan. “Thank you!”