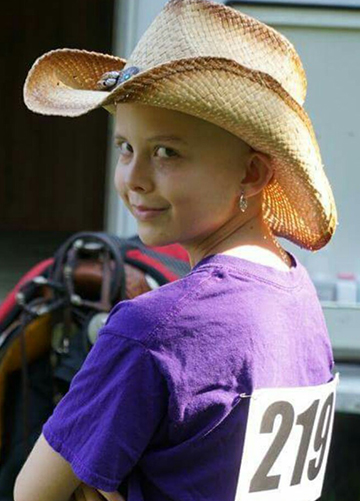 “With Ally's chemotherapy schedule, it was hard for me to work overtime which was necessary for us to pay our bills. I knew I needed to work but I just couldn't leave Ally."

Twelve-year-old Ally’s family was one that was always on the go. She was very active in softball and Taekwondo, having achieved her 2nd Degree Black Belt Decided in February 2016. She also studied hard to make the A/B Honor roll in middle school, and was a big sister to her 8-year-old brother.

“The roller coaster of emotions went on for a couple of weeks – from hearing the news your daughter has cancer – to Ally having to accept she had cancer herself. But it wasn't going to get the best of her,” described her mom, Suzanne.

Suzanne worked as a National Registered Paramedic, and her father delivered bread commercially. But both parents had to take time off work to bring her in for multiple clinic visits each week, and to help her with physical symptoms and medication administration. Their income was impacted since mom wasn't working the typical amount of hours, and was unable to get overtime in that she relied upon. That's when Pinky Swear helped support Ally and her family with a mortgage payment.

“This helped us tremendously financially and emotionally,” said Suzanne. “With Ally's chemotherapy treatments schedule, it was hard for me to work overtime which was necessary for us to pay our bills. I knew I needed to work but I just couldn't leave Ally. Being her mother, I felt as though I could not miss one day of her treatment. She sat in my lap every time she had to have her port access. She felt safe and comfortable in my arms. But when Pinky Swear helped out it was a weight that was lifted off our shoulders for that month and we really appreciated the help.”

Ally always had a smile - even though she didn't want to go and get her chemo - but she knew it was working when she felt better after her second full cycle. She still went to cheer on her softball sisters during their tournament despite not being ready return to the field yet. She did find some therapy with the arrival of a new puppy that loved her from day one, and from getting back in the saddle. When Ally took part in an Open Horse Show, she won two ribbons, and fell in love again with horses.

The other thing that was hard for Ally to accept was losing her hair. She was very frustrated with the amount of hair she lost by the second week of her first cycle of chemo. She decided to take charge of her hair by shaving it all off. Her mom reports they saw a different, more positive Ally that they hadn't seen in weeks that evening.

Since then she has been positive, full of life, and has become an inspiration to so many others – including 15-year-old Lance Fenderson. In June 2016, the Charlotte-based junior pro kart racer heard the Pinky Swear story through a family friend. He promptly made the personal decision to get involved with Playing for Pinky Swear by dedicating the remainder of his 2016 season in support of the Pinky Swear Foundation, and began racing in his custom Pinky Swear drivers uniform.

While most kids are kicking soccer balls or riding their bikes around the neighborhood, Lance competitively races a 70 mph go-kart throughout America. His hope was to raise money while promoting the foundation at venues and with people from all over the country - and even worldwide. Reflecting back at year end, he says it was the best decision he made all year.

“I could not be happier with what we accomplished as a team; winning multiple national championships and most importantly the exposure we brought to the Pinky Swear Foundation. This relationship will go long into my career, and some day I will be promoting Pinky Swear Foundation on the grand scale in professional motorsports,” said Lance.

Meanwhile in July, Fenderson and Ally were introduced. They became fast friends, and it further confirmed Lance’s decision to support the foundation through his racing.

“Ally came to the track for the first time with her family in 100-degree heat, and brought a smile on her face and a laugh for the team,” he said. “She has attended numerous races now, and brings good luck and that smile every time. Her determination to fight and win is evident, right down to cleaning the car between sessions.”

There is no sitting around for Ally – it’s roll up her sleeves and tackle the job – which is indicative of how she approaches every aspect of her life. In Fall 2016, Ally attended the unveiling of Lance’s new car at the Trump Concours, and posed with a pinky swear and a giant smile.

Lance shared, “I trust Ally and I will be lifelong friends, and I expect she will be sharing more times with our team in the future. Who knows, maybe the Indy 500 someday soon?”