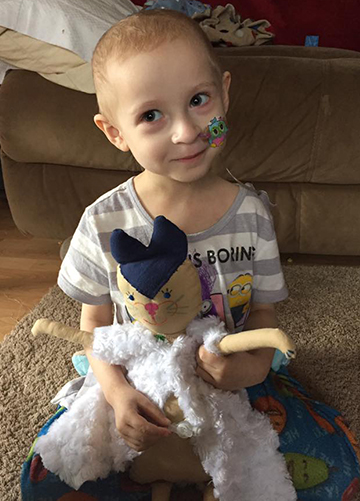 "The struggle is real and these families - ours included - need the support. We are greatly appreciative and extremely thankful that Pinky Swear was there for us when we needed it."

Sweet and spunky Annara is the youngest of four kids from an average family, with a home in Northwood, Iowa, where they home schooled their kids on one income. She has two older brothers, Sam (6) and Alex (18), and on older sister, Sarah (16).

Nicknamed NarNar, or Nara, she was a picky eater with a lactose allergy and was always underweight. Her mom, Michelle, struggled to get her to gain weight and to keep her regular. After making dietary changes, she started getting sick more and more frequently, eventually increasing to daily vomiting. After an ER visit and acid reflux diagnosis, Annara continued to struggle with emesis and was unusually worn out. She was spending more time on the couch than being a kiddo. Her mom continued ER visits with no answers, and finally pressed for a blood test and some answers for why Annara couldn't’t keep any food down.

An hour later the nurse came in and told them they were taking the 3-year-old by ambulance to a bigger hospital to get her to a pediatric hematologist.

“Why did they need that? They would give us no information,” recounted her mom, Michelle. “I was both scared and confused, but not really worried because I had no idea what to expect. It was a break from work for me, and I never thought there would be anything seriously wrong with my kid. Never did I think she could have cancer. She was perfectly healthy - at least to my eyes. But not to the lab machines.”

There she received a transfusion of red blood cells and platelets, and was admitted to the hospital. The on-call pediatric doctor came in and told them it could be an infection, or it could be a malignancy.

“Our mouths dropped. My heart sank and my mind stopped working,” she said.

Her husband had to get back home to be with the two other children. Annara slept for a few hours, and she and her mom were alone when the Oncologist/Hematologist came in and said they were 95% sure that her daughter had leukemia.

Nara awoke to a migraine. She had x-rays, an MRI, a spinal tap and a Bone Marrow Aspirate (BMA). If the BMA was positive she would be given a port and start chemo immediately. She also received two transfusions. Two days later, after a few more transfusions, on July 22, 2015, Annara was officially diagnosed with Pre B Cell TEL/AML Fusion Acute Lymphocytic Leukemia. They were told she had a good prognosis, but with this type of thing you don’t prognose because the outcome is not expected.

“That scared me, as a mom,” said Michelle. “We had 35 days in the hospital ahead of us, with me and my sweet 3-year-old. She had no idea what was going on but she adjusted amazingly.”

Nara wasn’t one to get too excited. She didn’t like walking, and a week after chemo started, she stopped walking altogether. Her legs were so weak with the pain from Neuropathy that they swiftly started nerve pain medication. Due to Annara’s refusal to eat, they also started a feeding tube and a non-dairy formula. They finally determined the true source of her vomiting was a severe casein allergy, which was unrelated to the cancer.

After 35 days in induction chemotherapy, Annara achieved remission. It was bittersweet because leukemia treatment was still going to be a long, grueling process – even if remission is achieved, treatment and chemo go to protocol. Meanwhile Annara was so home sick, she spent days walking the hospital, and watching videos on her mom’s iPad.

“She went so long without seeing her family and siblings. It was so hard on her. I loved seeing her smile whenever I would take her into the play room,” said Michelle.

There she developed a penchant for playing with kitchen sets, PlayDoh and big trucks. She loved Angry Birds and kitties, and by the time she went home had an entire bed full of stuffed cats.

While her dad was home taking care of the other children, Michelle had to take unpaid medical leave for nine months after using all of her FMLA time. So Pinky Swear stepped in to help with grants for two mortgage payments, exactly one year apart.

"Many cancer families have lost jobs, filed for bankruptcy and/or had to give up a lot to keep their lives somewhat together. If not for foundations like Pinky Swear, that made it possible for us to keep our house by providing financial support through this tough time, we would have been homeless and unable to provide for our kids and cancer kiddo," she said. "The struggle is real and these families - ours included - need the support. We are greatly appreciative and extremely thankful that Pinky Swear was there for us when we needed it."

Annara has been re-admitted to the hospital for various reasons, ranging from simple dehydration – which can be deadly in her situation – to a virus that someone brought home. She had had more than 12 red blood cell transfusions, 6 platelets, 9 lumbar punctures, and has been sedated at 10 times in the 14 months. She also has continued difficulties with feeding and GI issues. She has pretty severe damage to her stomach from the feeding tube, and suffers from what may be permanent damage to her nerves. She tires quickly, even though she loves to dance and draw, and is an enthusiastic and artistic child.

Nara still has more than a year of treatment and her family prays she does not relapse. It’s a long road to go, but for the time being she is free of her feeding tube, which was removed in July. Now she loves Cheese Pizza - especially Casey’s.

Michelle says, “We are a close family and she is loved so much. She is our rock, our hero, our tiny iron chick – and we love her more than anything in this universe.”