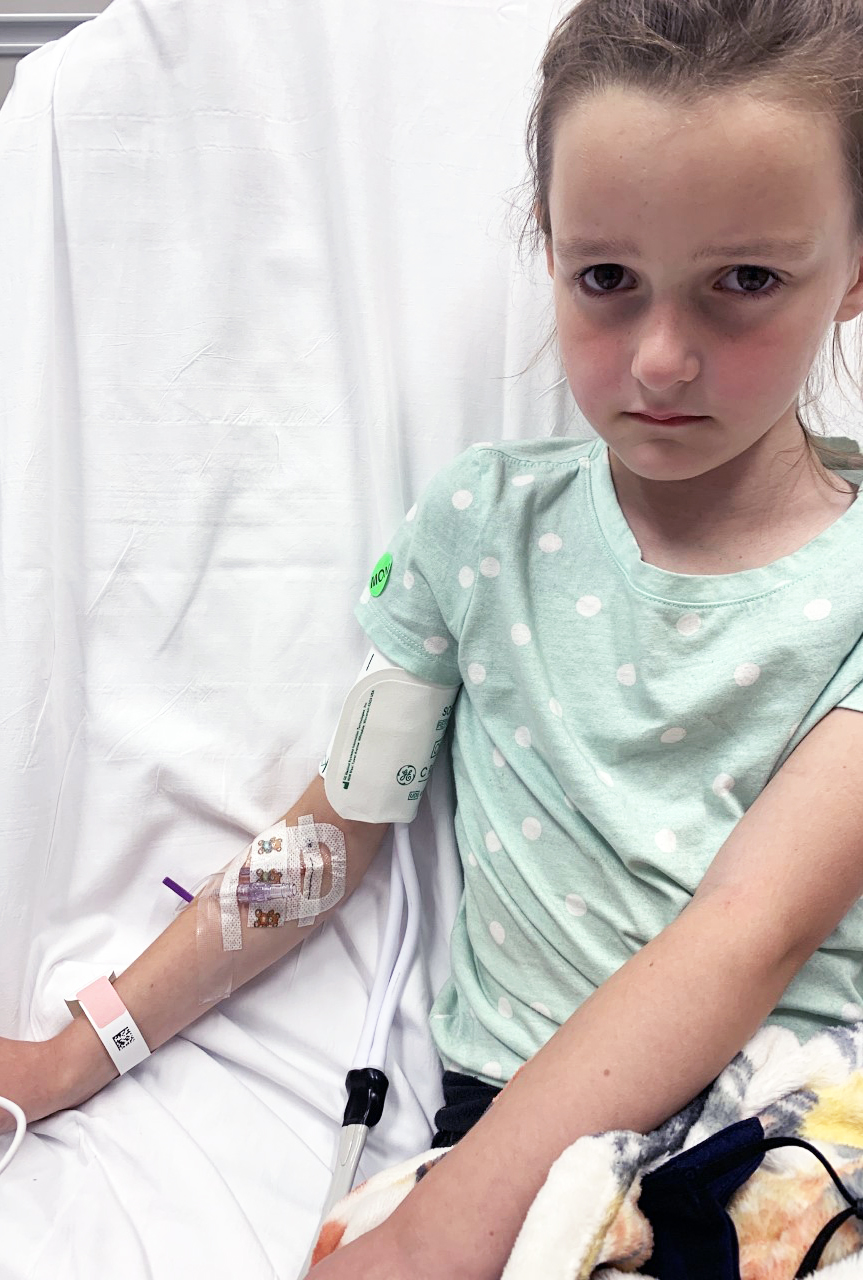 Seven months into this journey, her family has realized the huge positive impact and support offered by having a community that understands the difficult aspects of having a child with cancer, and her mom, Lynnie, has also begun to connect with groups outside of the hospital.

Anne was diagnosed with T-Cell Acute Lymphoblastic Leukemia on June 25, 2021 ¬– four days after being admitted to the University of Virginia Medical Center with what were thought to be symptoms related to a tick bite. Anne had been suffering since mid-April from random pains in her chest and neck, especially while sleeping. The family had also noticed a decrease in her appetite and energy levels, although she played soccer and danced in her ballet recital until a week before diagnosis. She had COVID-19 at the end of April and started waking up with shortness of breath towards the end of May. On June 12, she was diagnosed as having Rocky Mountain Spotted Fever by her pediatrician and completed a round of antibiotics, during which her parents first noticed what was thought to be a swollen lymph node. When the antibiotics didn’t decrease it, they returned to the pediatrician and were sent to the ER at UVA for more testing. Chest X-rays and an ultrasound revealed a four-inch mass in her left chest and neck that was pushing on her heart, compressing her entire left lung, and threatening her airway when she was laying down. Treatments started immediately, and she spent three days in the PICU before an official diagnosis.

Anne and her family are being treated in Charlottesville, as it is the closest facility to their rural home. Anne’s family has connected with a few organizations that support pediatric patients, although Covid has made connecting difficult. Seven months into this journey, her family has realized the huge positive impact and support offered by having a community that understands the difficult aspects of having a child with cancer, and her mom, Lynnie, has also begun to connect with groups outside of the hospital.

Anne’s mom, Lynnie, explained, “Before our weeklong clinic visit, Anne was getting very anxious and sad about tomorrow. She kept begging to just go play the Xbox with her dad and brothers before she had to leave to take her mind off it; it is seriously her favorite pastime currently! She used to spend so much time outdoors on the farm but doesn’t have the energy for that currently. I love hearing the laughs and banter coming from the TV room when they are all playing against each other! While the Xbox was a Christmas gift from another Foundation for Christmas, we are excited to use the Pinky Swear Orange Envelope gift card to help us create an even better gaming experience. Anne and her brother are now thinking they want to use their Pinky Swear funds to buy a bigger TV that will let them play four players more easily and making a big difference to them.”

At the time of this interview Anne was about to start Day one of chemotherapy.

“She started the day pretty nervous but surprised me by putting herself in the car and starting it”, said Lynnie. “I came out to her listening to music and ready to go. Then I got an entire rundown of the movie Raya and the Last Dragon on the drive down. I guess whatever takes her mind off the coming chemo is good and creates a feeling of normality – Anne just being a kid. Anne got the IV accessed without drama, chatted it up with her doctors, and made a new little friend through the window that looks just like her! Today we saw three little shiny kid
heads there at the same time and we tried to get to know one of them. Slowly, but surely, we’re making connections, despite Covid restrictions.”

Lynnie and Anne also got to connect with her main oncologist and got the best news ever after this round, about 4 more weeks, Anne will finish frontline and be in maintenance*. The whole time, the family thought that she had another 8 weeks after this of interim maintenance, but they were complete mistaken!

“This is like running a marathon, getting about 2/3rds of the way along, knowing the rest is all downhill, and then someone picking you up in a golf cart to ride to the end,” said Lynnie.

*Maintenance means the start of things like socialization, hair growth hopefully, possibly sports and school, and maybe travel! Anne will have to take it slowly as she starts out to see how her body adjusts and make sure her immune system is kept low to fight the cancer. The goal of maintenance is that Anne lives her life as normally as possible, while using oral chemotherapy and occasional IV chemo to keep the cancer at bay.

“It means once a month in clinic and daily oral medications until about November 2023, but we can do that! While there can be complications, they normally are much less complex and it’s a huge milestone in our journey!!” said Lynnie.

With this news, the family is optimistic that they are over the worst and can look forward to better days ahead.

The family’s community hosted recently hosted 'Cancer is Messy: a Messy Day on Eldon Farms' to honor those fighting cancer and raise funds for organizations that had supported Anne, including Pinky Swear Foundation.

“The event was a huge hit and we were thrilled to raise over $5000! We are eager to give back to those pediatric cancer non-profit organizations, such as yours, that have supported our family over the past year,” said Lynnie.