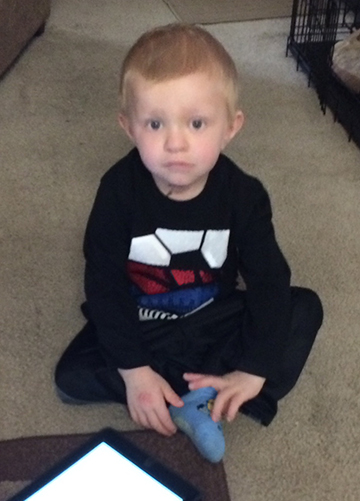 “It has been an incredible struggle financially, emotionally and every other way you can think of.”

Brayden is the youngest of four children to Rob Monaco and his wife. Rob noticed that 9-month-old Brayden was dropping his head and lifting his arms in the air when he was feeding him in his high chair. It was only a few times for a few seconds, but it was alarming.

After meetings with the pediatrician and a referral to a neurologist, Brayden was diagnosed with Neurofibromatosis type 1 (NF1), a rare genetic disorder that causes abnormal skin coloration and benign tumors, oftentimes on the spine, brain, and optic nerves. Because of some skin lesions, a specialist dermatologist suggested a blood test to see if Brayden also had Juvenile Xanthrogranuloma (JXG), which he also tested positive for. JXG and NF run in the same families, but are so rarely found in one patient, Brayden is 1 in 3.4 million that has both.

To further complicate matters, Brayden was also diagnosed with MDS (Myelodysplastic Syndrome), which developed into Juvenile Myelomonocytic Leukemia (JMML). Only 1% of children with both JXG and NF will develop JMML, and the only cure is a bone marrow transplant.

Brayden had his Bone Marrow Transplant on May 6, 2014, from his older sister, Bella. The 5-year-old was tested to see if she was a match and it turned out that she is considered a ‘perfect match.’ Bella was admitted into Levine's Children Hospital for Bone Marrow Harvest Surgery. When the doctors pulled down the dressing off of Bella's lower back to make their needle marks for the bone marrow extraction, they were blown away at what they saw. There were two dimples pointing downward in the exact spot where they would normally put their marks. Instead they used the bottom of the dimple on each side exactly where their mark point would be and went to work. They also take a white blood count before surgery, with a typical count at 28-30. On her first count Bella was at 58, but the doctor couldn’t believe it and ordered another count. The next count came back at 59. Both doctors said that Bella was ready to do this, and that she was "The Perfect Match" for Brayden. She had all of the doctors and nurses laughing just before surgery, and everything went according to plan. She was a rock, and so strong to do what she did for Brayden.

Unfortunately, the bone marrow transplant was not successful, and Brayden relapsed.

They will attempt a second transplant with Bella's stem cells in February 2016. If for some reason it does not take the second time, Brayden will have full body radiation, and they will try with Rob’s marrow as he is a half match. If that doesn't work, they will go to the National Marrow Donor Registry to search for a non-related match to save Brayden’s life. Until then Brayden is on medications for seizures, blood pressure medication, and too many more to list.

“Brayden is the strongest little man I know,” says Rob. “He has numerous surgeries, x-rays, ultra sounds, you name it – he has had it done to him not once, twice, or three times, but many many times over an over again. He does it all with a smile and grace. He is truly amazing and He is my strength.”

The list of procedures Brayden has had to endure is far too long for any four-year-old:

“It has been an incredible struggle financially, emotionally and every other way you can think of.”

Pinky Swear has helped with payments for rent and gifts for the kids for Christmas. Staff have provided a listening ear, moral support and guidance to help Rob with resources for his family.

Rob said, “I know God is watching over Brayden and my family and I know we will pull through this even stronger then before. My heart belongs to my children. The sun rises and sets with them and there is no where else I would rather be or be doing then taking care of them, even if I don't have a penny to my name.”