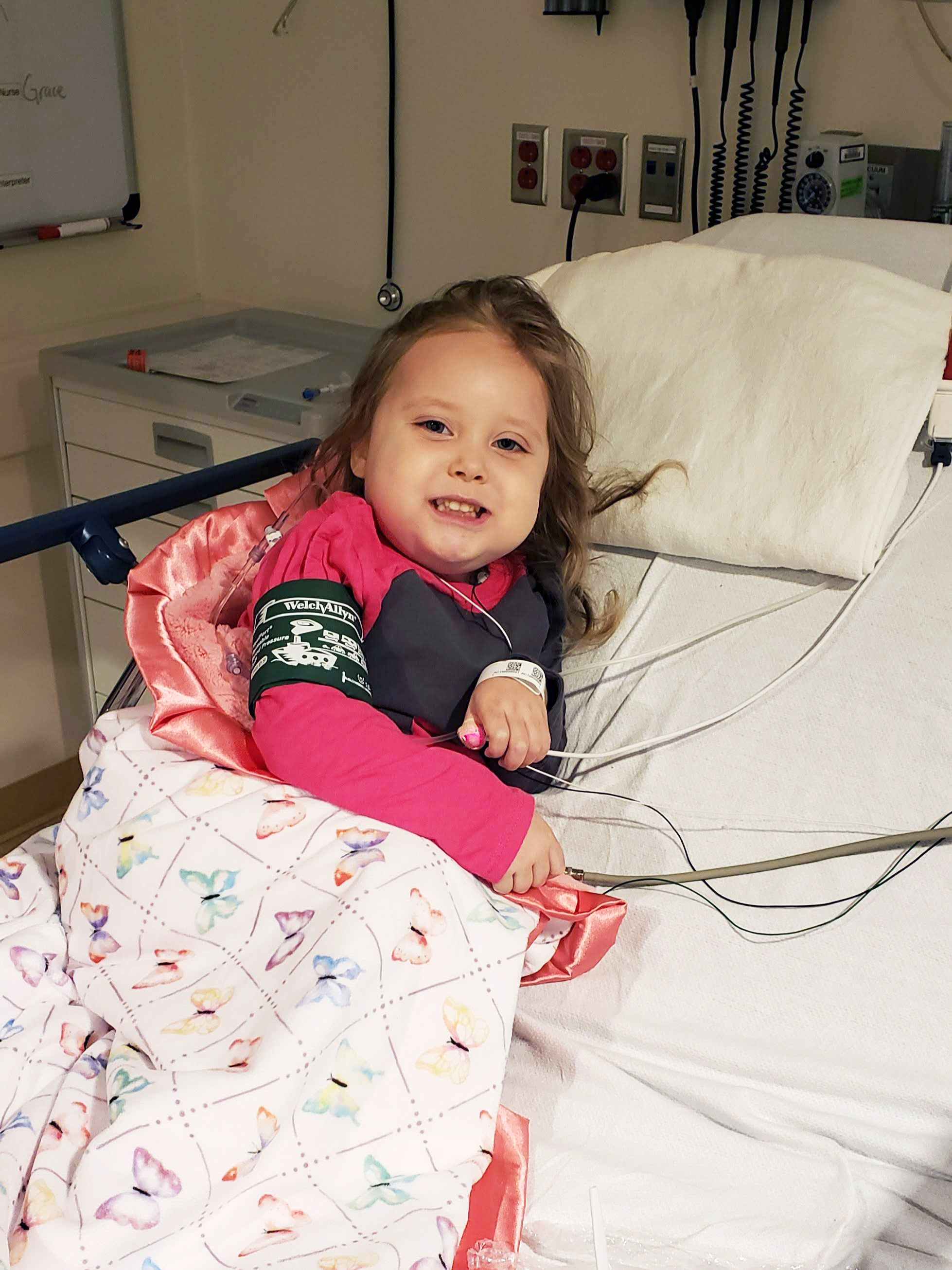 “Receiving a child’s cancer diagnosis is something I would never wish on any parent, but having no option but to deal with it, having organizations to support you makes a big difference. Even a small gift card means so much, covering a mortgage is unbelievably jaw-dropping.”

“Mike remembers her being more sick than the other kids that winter of 2019,” explained Cassandra, Cecilia’s mom. “She kept getting a low-grade fever and seemed to have some discomfort which the doctor put down to a perforated ear drum. Come May, it was still going on. She would take long naps, sometimes up to four hours, and she would wake up soaking wet. I would have to change her clothes. They thought it might be strep or a vitamin deficiency and they took some bloodwork.”

Cassandra describes Cecilia as a very extroverted child who is always initiating conversations with people! She was being treated as a queen the day of our Facetime interview and enjoying being brought presents by her older brother and sister. She told me that she remembers the “poky” butterfly needle where the port is accessed. She is also excited for her end of treatment party which will be at a park with a big playground and will include, of course, food and drink.

The family was about to leave for a wedding in Colorado, so they delayed the second round of bloodwork for about a week.

“I’ve never forget the call that came with the results one Tuesday night. I was making tamales for dinner. Mike was on his way home and the main doctor at the clinic called. I grabbed a pen and paper because I knew I might not remember what he said.”

The doctor told Cassandra that Cecilia may have cancer and that they should take her that night to the ER for more tests.

Mike stayed home with the older two, and Cassandra’s Mom started driving up from Milwaukee. The family had to get through Father’s Day weekend and wait until the following Monday to get the results of Cecilia’s bone marrow biopsy. She did indeed have cancer. The whole experience was entirely foreign to Cassandra, never having been in a hospital even to have her babies.

“I’m an independent financial advisor and work with my mom and also an assistant, and, thankfully, they handled everything that first week,” Cassandra said. “The first month of treatment was absolute hell; it was so rigorous and the steroids had her up all night crying for food, she was so hungry. We had to feed her, of course, the specific things she wanted at the time.”

The doctor explained how strong the chemotherapy was and all the dangerous side-effects. In the meantime, Mike was back at the house doing a deep-clean and installing special air filters to get the house ready for when Cecilia came home.

“The first month was very difficult; we had to pin her down to take her oral meds. We were very sleep deprived and just about managing to keep our heads above water. As time went on, we developed a better system and a way to make the meds more appetizing.”

Mike took some time off and then worked virtually, and Cassandra’s mom stepped in to help with her work; in that way the family were fortunate. Nevertheless, the community support the family received was invaluable. Pinky Swear sent an Orange Envelope gift card package and another organization paid one month of their mortgage.

The first month was the hardest with the intensity of the treatment, the shock, sleep deprivation and rollercoaster of emotions. Another tough time was in the November when Cecilia lost her hair and, for the first time, truly looked like a child with cancer.

“Receiving a child’s cancer diagnosis is something I would never wish on any parent, but having no option but to deal with it, having organizations to support you makes a big difference. Even a small gift card means so much; covering a mortgage is unbelievably jaw-dropping.”

Cassandra connected with other moms, one in the neighborhood whose three-year-old daughter was also diagnosed with leukemia and another whose child was also three and called Cecilia.

“It was almost like those connections were meant to happen for a reason,” said Cassandra.

Two weeks after the family’s fourth child was born, the family had a scare when Cecilia’s numbers “tanked.” Either the cancer had returned or she wasn’t metabolizing the chemo. Thankfully, it turned out to be the latter and Cecilia was put on a lower dose of treatment until that ended in August.

“In a weird way, although everything was turned upside down, our quality of life went up; we spent so much time together. It was a beautiful opportunity just to be together as a family which we will always remember.”

The family chose to take this feeling of togetherness one step further by spending four months together in Florida over the winter and spring of 2022. It was a magical, much-needed time after so much stress and uncertainty that the family will remember forever.