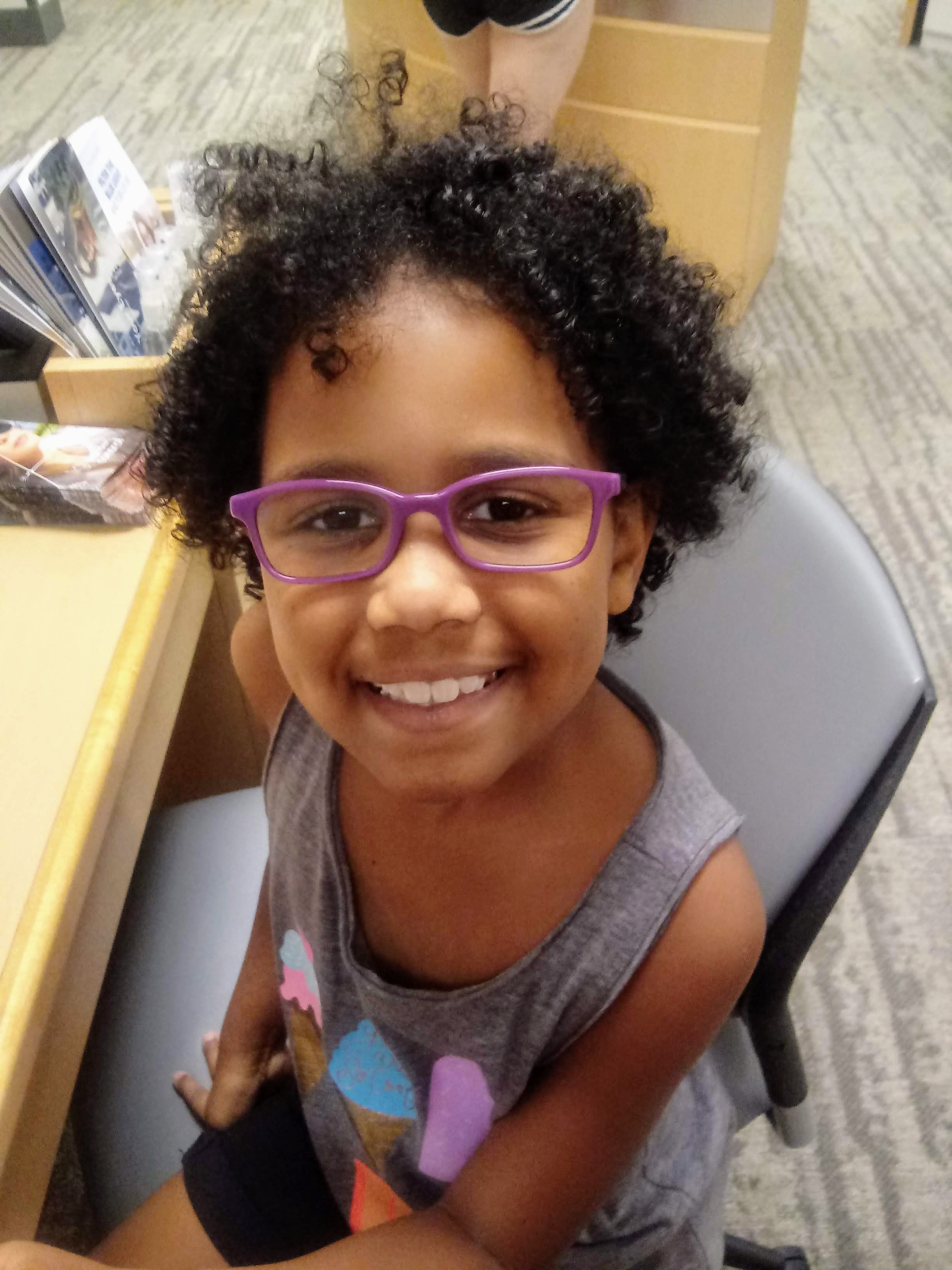 They ran further tests and Clo was diagnosed with stage four neuroblastoma. The doctor set out an 18-month “head to toe” treatment plan that must be followed. Mia and Clo did not leave the hospital for 15 days.

Chloe (Clo) turned nine years old in August and has just started third grade. She is glad to be going to school in-person at last with the flexibility of learning at home if she needs to depending on her treatment.

Clo lives in St. Peters, Missouri with her Mom, Mia, and her brothers, Maurice (18) and Cory (15). Maurice works with his dad’s hauling company, and Cory is a Sophomore taking several AP classes; he’s thinking about a career in engineering or possibly as a coder writing his own video games.

Mia works full-time in quality assurance for a home warranty company. She has worked at home since Covid started. When Clo is in the hospital, it’s hard for Mia to work, so she makes up for it other weeks by working 60 or 70 hours per week, which is clearly exhausting.

Born in Fort Bragg, North Carolina, Clo moved to Missouri when she was small. In 2017 Mia noticed that Clo was limping. Mia’s dad had been looking after her, and Mia thought that maybe she had been knocked over by his black lab. However, when she didn’t get better, Mia took Clo to urgent care and then to her primary care doctor. After more than two months without getting closer to finding out what was wrong, they were referred to the eighth floor of the children’s hospital in St. Louis. It was Memorial Day weekend, and Clo’s brothers were there in the hospital with Mia. The doctor came into the room and right away explained that they were to go to the ninth floor, as Clo had cancer, possibly leukemia.

“I didn’t hear anything after that,” said Mia. “Then, suddenly, I was acutely aware that the boys were there, hearing first-hand that their sister had cancer. Thankfully, my dad, aunt and niece were there to support me and the boys who were young at the time.”

They ran further tests and Clo was diagnosed with Stage Four Neuroblastoma. The doctor set out an 18-month ‘head-to-toe’ treatment plan that must be followed. Mia and Clo did not leave the hospital for 15 days.

Mia and her husband were going through a divorce, which added to the stress. Mia not only had to worry about Clo in the hospital, but she was also concerned about the boys’ wellbeing.

“I was doing a lot of micro-managing from the hospital,” she said. “Making sure they got to school and got regular meals; it was very hard.”

The reality got even worse for Mia as a single mom of three kids, trying to work 12 hour days to pay the bills.

“I ended up having to file for bankruptcy,” Mia explained. “My husband took the car, so I had to find one. It was essential to get Clo to her appointments. We also ended up moving into a two-bedroom apartment with my mom. Right after that, my mom had a bad car accident.”

Mia’s mother has since passed away.

It’s so hard to even contemplate the series of tragedies and misfortunes affecting Mia and her family, yet she had no choice but to keep working as much as she possibly could in between caring for Clo in the hospital.

Mia learned about Pinky Swear Foundation from one of the other families in the cancer community. Clo received an Orange Envelope when she relapsed.

“It was really, really nice. Being a single mom, it was so hard paying for extra medicine for Clo, but for a couple of weeks I didn’t have to worry about groceries. Pinky Swear also funded our auto payment in July; that was a big relief. Keeping the car is so important.”

Clo relapsed in June 2020. Her original tumor was in her abdomen. Since her cancer is in her bones, though, when Mia discovered a lump on her head, she was worried. Clo started experiencing intense headaches and jaw pain. To treat this, Clo went into the MIBG room. MIBG is a more intense type of radiation treatment. To avoid nursing staff experiencing this level of radiation, Mia was only allowed to go into the room with Clo every few hours.

“It was so hard. I was continually going in but not able to touch her, which is unbearable as a parent. She hated being alone.”

Clo’s tumor has eaten into her skull and part of it remains inside and is inoperable. She is now being treated with an antibody called 3F8 which attaches to neuroblastoma cells and helps focus a patient's own immune system on attacking neuroblastoma cells. From Monday, Clo will be inpatient again for a while undergoing this treatment.

“I would just say ‘Thank You.’ It really does help. A lot of the time you don’t know what you are going to be doing that day, let alone how you are going to pay the bills. It’s one less thing to worry about. There have been some good moments – whenever Clo gets to ring the bell, for example. Also, my sons: Maurice has gotten all the way through high school since Clo has been sick, and Cory is doing so well despite everything.”

Clo also loves receiving mail and was excited to share a picture of her holding her birthday card mailed for Mitch’s birthday in July.

Clo will turn 10 in August, and is she is hoping for a horse-themed party!

Clo is in treatment but it is being disrupted due to hives, swelling of her face and bad itching. She was unable to get her shots and family is waiting to hear what the doctor says before they proceed. Mia is exhausted because hospital takes 8 hours, then she works in the evening, gets dinner, figures out what her boys need and then gets ready to do it all again the next day!

“It is still a little unreal but so very appreciated. For the Foundation to choose us was truly a blessing.”

In July, Clo had been through 10 cycles and 30 treatments. Mia and Clo started traveling to New York in August.

“It’s been a long exhausting few weeks, but we are down to the last week of travel and shot for this month,” said Mia. “This second shot was rough on her – two days of a 102 degree fever, itching, some hives, redness, pain, swelling and limping. We’re staying at the Ronald McDonald House. We’ll be going back and forth for the next three years. It’s very expensive, and the transportation cost is on me. It’s $100 a trip just for Ubers. But our airfare has been covered for our first two trips so far, so hopefully we will continue to have help through organizations with our flights.”