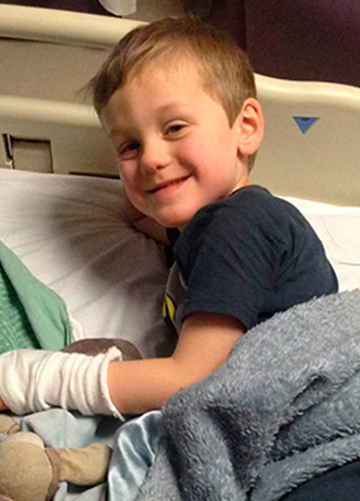 “It has been a blessing to have so much support from so many, and the support of Pinky Swear has meant more than anyone could ever imagine."

For the first half of 2014, Emily and Mike’s second son, Colt, had been complaining of his leg hurting when he woke up or when he was in his car seat. They attributed it to his leg being placed in a strange position and losing circulation. But when the complaining didn't stop, Emily decided to take him in. The doctor examined Colt, said that everything looked good, and it could just be growing pains. He recommended they bring Colt back in if it persisted.

Emily mentioned Colt’s ongoing complaints to the doctor at his older brother, Hunter's, well check, and they brought him back in for an exam. The doctor also observed Colt’s run as he did not run like other 3-year-olds; he was always the last one to finish, and ran somewhat bow-legged. The doctor agreed that Colt's gait was off, and referred them to an orthopedic specialist.

On May 16, 2014, their whole world was turned upside down. Emily had a busy day teaching, so Colt's dad took him in for his MRI. She received a call at work from Mike, and he was sobbing. They had found a mass in Colt's spine, and he needed to go to Children’s Hospital. Little did they know that they’d be spending the next nine days straight in the hospital, in a total state of shock.

They were told at the hospital that Colt had a rare type of childhood cancer called neuroblastoma. There are only about 700 cases seen world wide annually, and only 6 or 7 cases a year at that hospital. After additional test and scans, it was determined that Colt's tumor was of the intermediate kind, not requiring the most aggressive chemotherapy, and that it hadn’t spread. The goal was to shrink the tumor with four rounds of chemo to make it easier to remove surgically. Because of his obscure diagnosis, they sent a biopsy to an expert in California for confirmation.

Two rounds into chemo and two weeks later, the doctor called Mike and Emily with the results, and it was not what they were hoping to hear. Colt's cancer was an even rarer type - found in only 5% all neuroblastomas - which is resistant to chemotherapy. They needed to change to an aggressive chemotherapy protocol, and they started chemo over from square one.

Emily took leave from work immediately upon Colt’s diagnosis, while Mike continued working but taking time off for major doctor appointments and surgeries. While Colt and Emily went in for hospital stays, Mike and Hunter maintained the routine of school and extracurricular activities. They tried their best to keep Hunter's life as normal as possible, as he is on the autism spectrum and has special needs of his own.

At first, Colt was great - so happy and cheerful, and all of the nurses wanted to work with him. After a few months, he understandably got sick of it all. He was upset when he had to go to a regular doctor's office visit, much less the hospital. He was resistant to seeing the nurses and physicians, afraid that they’d do more to him. And he was unable to walk due to his first surgery, requiring physical therapy three times weekly and occupational therapy once weekly, to get him back to walking.

“The cancer diagnosis has changed my family,” explained Emily. “We spent the first nine months in and out of hospitals, re-adjusting our regular family routine, going to various appointments, receiving different treatments and multiple surgeries to remove his tumors, and even having to make a trip to Chicago for four weeks to receive a special form of radiation. Almost two years later we are just now getting to a point where life seems more normal.”

Pinky Swear helped Colt’s family with a grant for a mortgage payment and an All-Star Weekend. While the grant helped alleviate some of the financial stress, the weekend was extra special as it gave their family some much needed fun and time away, and quality time together as a family unit. Colt and his family attended the 2015 Hy-Vee Pinky Swear Kids Triathlon in the Twin Cities, and enjoyed seeing how many people were there to support kids with cancer. They also attended a summer picnic for Pinky Swear All-Stars and triathlon participants, and even met a fundraiser who raced in honor of All-Star Colt.

Colt currently has to go for scans every four months for monitoring. If his tumor is still unchanged in November 2016, Colt will be considered cured.

Emily remarked, “It has been a blessing to have so much support from so many, and the support of Pinky Swear has meant more than anyone could ever imagine. We all know too well that cancer can come at any time, and we are now on severe high alert any time something "hurts" on our kids - especially Colt. Cancer is and forever will be a part of our lives. It is something that will never go away, even if Colt is cured of it.“