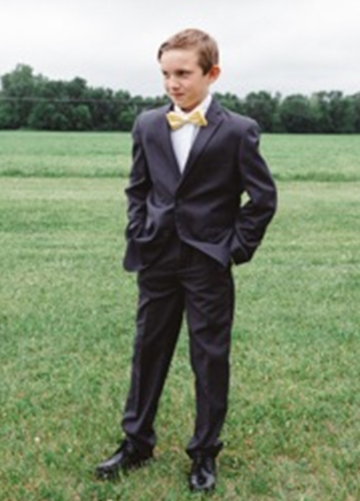 “From the bottom of my heart, as a mom watching her child suffer, I am so grateful to Pinky Swear for all of their help, but most especially giving our family the gift of a whole expense-paid weekend.”

Danny, also known as “Downtown Danny V” by his peers, was a basketball standout in school. On top of being a healthy, strong athlete, he was very much involved as a student. As a member of the school choir and Scouts, his future looked bright.

In August 2015, Danny’s parents began to notice spots around his hairline. Once energetic and vibrant, he shifted towards a state of depression, withdrawn and frequently exhausted. While he was playing midfield for the school soccer team, he began to sit out because he was so winded. Watching this athletic decline take place, his parents knew they needed to take him to see a pediatrician.

After the doctor took a look at some of Danny’s spots, he referred them to the Children’s Hemoc/Blood Disorders Clinic in Minneapolis. That same day, he was admitted into the Children’s Hospital and in September 2015, Danny was diagnosed with High Risk TAL Leukemia. Two days after the diagnosis, he underwent surgery and started the first round of chemotherapy. From then on, he would have to overcome many hurdles physically and emotionally.

Danny’s family of six were heartbroken by the news, but they were determined to surround him with positive energy. Every night his father would commute home from work to pick up his three teenage sons and head over to the Children’s Hospital for quality family time with Danny. Though times were tough, everyone worked together to keep the mood upbeat. The family was swept up in a tidal wave of support, receiving meals, gift cards, and most importantly; visits.

Danny was not able to return to school that year due to the complications and severe side effects from chemotherapy, but was able to Skype his classmates from the hospital. Being a member of the soccer, basketball, or baseball team was not a possibility, and neither was attending choir practice or joining fellow Scout Troops on camping trips. It was especially painful for Danny’s parents to watch as their son was unable to enter sixth grade with his class.

The Pinky Swear Foundation made sure Danny’s family did not go through the crazy journey of childhood cancer alone. In December, Pinky Swear invited Danny and his three brothers to a toy shop so they could pick out Christmas presents for each other. “The toys were top quality and the staff even wrapped the gifts for the boys so they would remain a surprise,” said Danny’s mom. Keeping in mind that frequent trips back and forth from home to the hospital lead to frequent trips to the pump, Pinky Swear provided gift cards to help out with essentials such as gas and groceries.

Pinky Swear also sent Danny and his family out for an All-Star Weekend at the Hilton in Minneapolis. They enjoyed a day at Nickelodeon Universe in Mall of America and dinner at Red Lobster, a restaurant Danny had always wanted to try. After that weekend, Danny went home full from a delicious meal of crab and lobster with all the remote control cars and board games a boy would need.

Danny’s mom was full of gratitude: “From the bottom of my heart, as a mom watching her child suffer, I am so grateful to Pinky Swear for all of their help, but most especially giving our family the gift of a whole expense-paid weekend.”