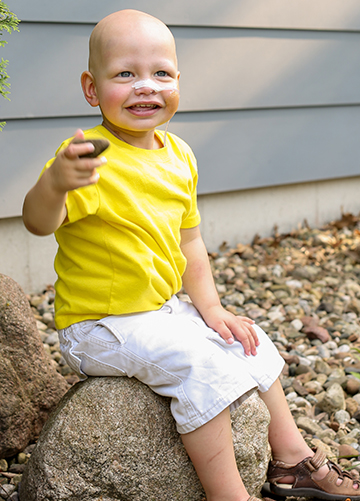 “It really helped by relieving some of the financial stress so we could focus on enjoying the time we have together as a family."

Drew has always been such a happy boy. And as soon as he could walk, he was always on the go. Playing, climbing running – he is "all boy". But in the Fall and Winter of 2015 he started to slow down, and wasn't his usual happy self.

Several ear infections and the holidays distracted from the true cause. After four doctor’s visits and three different antibiotics in two weeks for ear infections, in late January 2016 his parents found out that he was actually dealing with Stage 4 high risk neuroblastoma.

“It all made sense, and was almost a relief to finally know what was wrong and begin to make him better,” explained his mom, Heidi.

And so his intense treatment began to accomplish that goal. So far Drew has completed six rounds of chemotherapy, a major surgery to remove his tumor, back-to-back bone marrow transplants, and dealt with several infections and complications. Currently he is undergoing proton beam radiation, after which we'll end his treatment with six months of immunotherapy. He's endured it all with a smile on his face and enough charm to knock your socks off.

“His amazing attitude and drive to enjoy life has encouraged so many through this tough battle,” said Heidi. “We can't wait to see the places he'll go and the things he'll do in the future.”

Drew’s big sister Molly has been just as brave and strong as he has as she's dealt with a lot of change over the last eight months as well. The stress this kind of situation can put on a family is immense, but Drew’s family is so grateful the experience has brought them closer together, and made them more appreciate of all they have.

Pinky Swear provided Drew’s family a grant they used to buy groceries and fill their gas tanks during this challenging time. “It really helped by relieving some of the financial stress so we could focus on enjoying the time we have together as a family,” Heidi remarked. “We are forever grateful for all the support we've received through Drew's treatment, including all Pinky Swear has done for us. There can be so much good come out of terrible situations if you chose to allow it!”