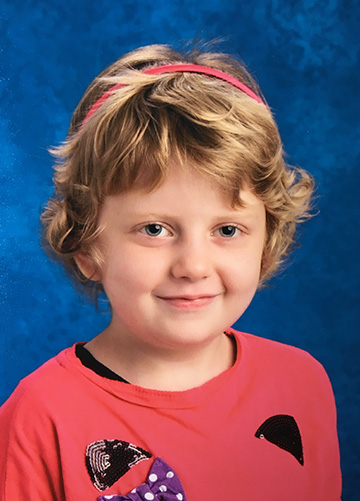 “Not knowing whether we would return to work, we were grateful for the security and peace of mind the grant gave us."

Emily and Joseph were high school instructors teaching at a private, international English school in Saudi Arabia. They lived on a compound with other American and British teachers, and their daughters Sophia and Eden attended school at the American school.

Weekends involved playing with other kids on the compound, and during vacations, they would often travel to other countries. Eden loved to play at home, and spend time with her sister and family.

Eden had been sick for about a week, and they had taken her to the doctor who prescribed antibiotics. Emily had also noticed bruises, and after doing some research, she had a growing fear that leukemia could be a cause. When Eden got worse despite the antibiotics, they returned to the doctor.

“When I mentioned the bruises, I saw the look of concern in his eyes,” recalled Emily. “He ordered blood tests, and then he told me to stay at the hospital until the hematologist arrived. When the doctor said "cancer," everything came crashing down. My worst fears were true.”

Eden was checked into the hospital that night. Not knowing what they were up against, they were unsure of whether to stay or to travel back to the U.S., or it was even safe to travel. Ultimately, they decided to return to Des Moines, Iowa, to be near family. Emily went home, packed a bag, and left for the airport with Eden.

Eden's parents spent her first year of cancer treatment apart. Her dad and sister Sophia returned to Saudi Arabia so he could continue working and maintain their health insurance. The year was long and difficult as Eden experienced toxic reactions to her chemotherapy and many fevers and illnesses.

Meanwhile Eden and Emily were without a home, car, or any of their belongings. They were unsure of whether they would be returning home to Saudi Arabia. They scrambled to find a place to live, and the social worker at the hospital applied for a grant from Pinky Swear to help with their first months' rent in a new apartment.

“Not knowing whether we would return to work, we were grateful for the security and peace of mind the grant gave us,” said Emily.

Eden is in her second year of treatment, and she is progressing. This year of treatment is less intense than the previous year, and she has had a return of energy. Her parents are so happy to see her playing outdoors, running around on the playground, and laughing with her sister. She has another half a year of treatment remaining, and they remain hopeful that she will continue to do well.