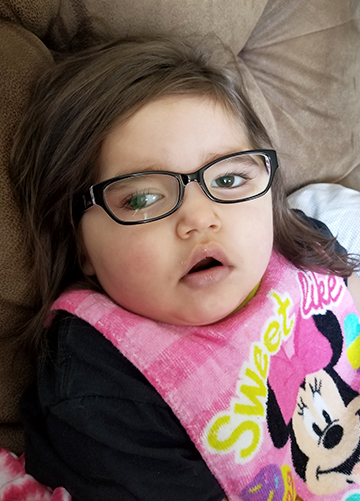 “Pinky Swear helped lift a huge burden off our shoulders by catching up our rent for us."

Two-year-old Ellarae loved going to her babysitter’s while mommy and daddy were at work. Her sitter noticed "Ella" was having issues with her eyes in May 2015, and her vision declined rapidly from there. A couple months later, and the week before she had her first MRI, Ellarae’s parents had to feed her each meal because she could not see her food in front of her.

That's when Ellarae was diagnosed with a massive brain tumor on July 20, 2015. They did not realize that her getting car sick or having issues staying asleep were side effects until after she had an MRI.

“I can't even describe how it felt. We were very upset, shocked, and in disbelief. We never thought that this could happen to our sweet little girl," her mom, Kalee said. "I still think we feel those things from time to time.”

Two days after her diagnosis, Ellarae had a craniotomy to remove as much of the tumor as possible. During the surgery she suffered a major stroke that has affected five different parts of her brain, and left her unable to do the independent things she used to do. They spent a total of four months in the hospital following her surgery.

During that stay, Ella had a rare reaction to one of the chemotherapy medications she was taking, paralyzing her vocal chords for about a month. She had a tracheotomy placed until her vocal chords recovered, and chemo was put on hold.

The last MRI that she had showed that she has irreversible brain damage and will more than likely never talk or walk again. Not giving up hope, they have started Ella in hyperbaric oxygen treatments in January 2016, and did a total of 40 treatments.

Through all this, Kalee was unable to work much, while her father had put his job on hold to stay home and take care of her every day. He exhausted all of his leave at work, going on leave without pay status. They were falling behind on a lot of their bills.

“Pinky Swear helped lift a huge burden off our shoulders by catching up our rent for us,” said Kalee.

Ellarae is on her third chemo regimen, but overall, she is doing good. This one seems to be doing its job, and her parents are anxious to see what her next MRI will show as the last one showed stability and a little shrinkage of the tumor.

“She has some bad days once in a while but what 3-year-old doesn't?” said Kalee. “Her cancer has brought us all closer. We are so thankful for all the support and love from our family and friends.”

Love Your Melon is an apparel brand run by college students across the country on a mission to give a hat to every child battling cancer in America. A percentage of the net proceeds from the sale of all Love Your Melon products are donated to Pinky Swear Foundation to support kids with cancer and their families