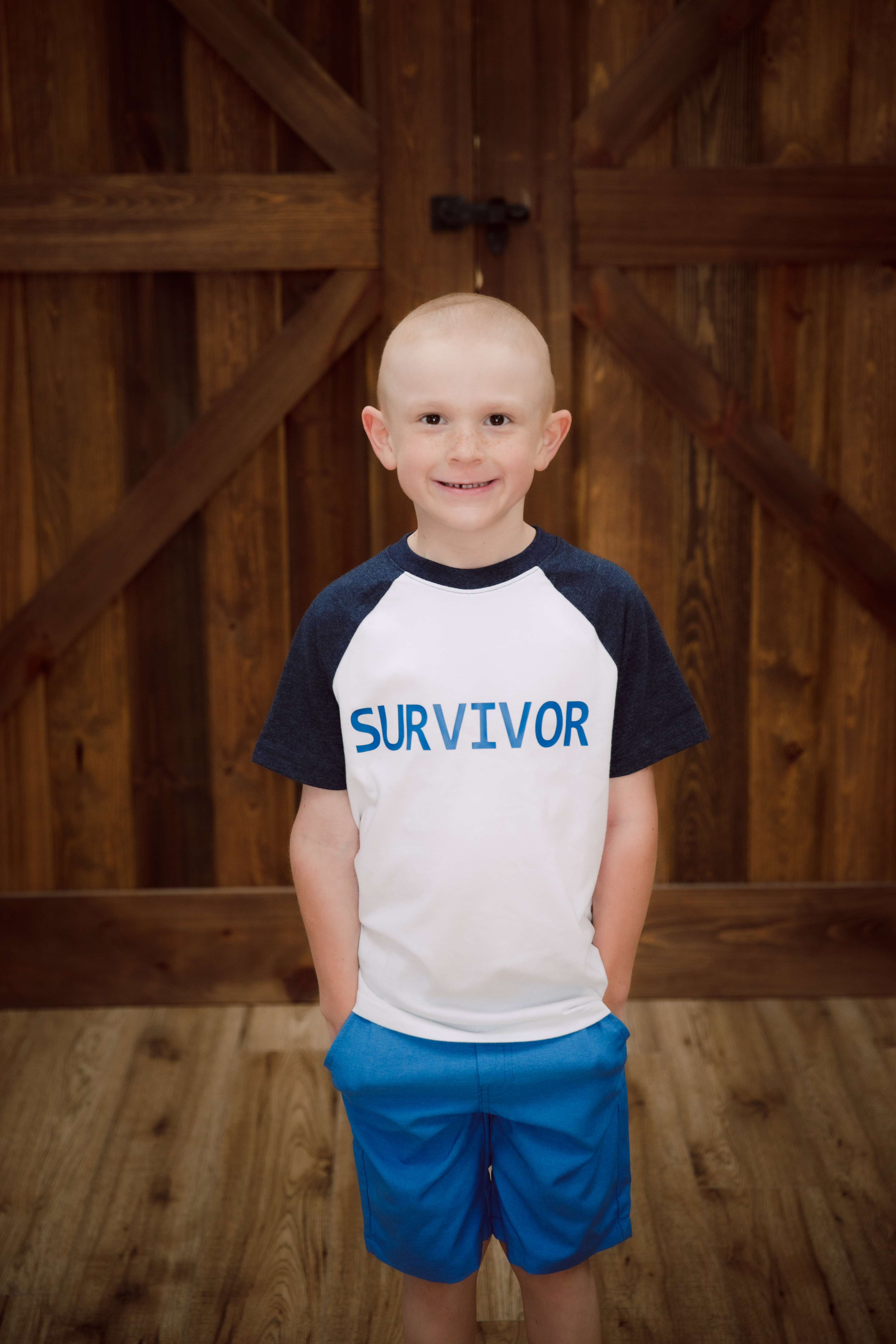 The tumor ruptured, and that is why his temperature had spiked back on New Year’s Eve; his tumor had been ruptured for nine days inside his little body. The surgery team spent the first two hours cleaning just his spleen because the rupture and inflammation had caused havoc on his insides.

It was Christmas 2018 when five-year-old Haakyn’s parents noticed that he was pale and had no energy. On New Year’s Eve, he complained of his back hurting and had a temperature spike. The doctor said that he was constipated and prescribed MiraLAX. He seemed fine for the first nine days, apart from looking pale. A friend told Tory she thought Haakyn had a green undertone. An x-ray showed air bubbles on one side of his abdomen, indicating there was something there, and they were sent to Children’s Hospital for an ultrasound.

Three hours later, they learned that Haakyn had cancer.

It only took two minutes to turn their whole life turned upside down.

“I am not a crier,” explained Haakyn’s mom, Tory. “You go into fight mode right away. The last thing you want to do is look broken in front of your child and make the situation even scarier for them!”

Tory remembers the doctor asking many times if she fully understood the severity of the situation because they were not showing emotion.

“When you have kids, you want to keep all fear from them. I couldn’t sit there crying, that would have got him very worked up when he was the one looking at my face to make sure he was going to be okay.”

Once on the oncology floor, they quickly realized that all the parents are doing the same, smiling and pushing their kids on the tricycles with the IV trailing behind them, trying to stay positive.

Haakyn had surgery the following day; he had a volleyball sized tumor attached to his kidney inside his little body. Surgery was supposed to take four hours, but it took more than six. The tumor ruptured, and that is why his temperature had spiked back on New Year’s Eve; his tumor had been ruptured for nine days inside his little body. The surgery team spent the first two hours cleaning just his spleen because the rupture and inflammation had caused havoc on his insides. They reported they had started with four hands and finished with 12 hands inside of him. Because of the rupture, he was bumped up a stage to Stage III Wilms Tumor.

Haakyn was in a state of shock and refused to talk or move for nine days.

“The team came to me and told me that they wanted him to be able to manage his own pain relief. They had never given a five-year-old control of the morphine pump, but they were willing to see if he could manage it. Once he had control of the situation and the button in his hand, Haakyn brightened up considerably. We realized that you have to give them power over their own body and keep them informed of what is going on. They are scared, but they also want to know that it’s going to be okay.”

“Haakyn lost a substantial amount of weight, nothing tasted good, and he dropped from 75lb to 38lb. I thought at one point that we may lose him to weight. He wouldn’t even touch ice cream. It was very scary.”

Eventually, a feeding tube would help him get over the hump and maintain weight.

Haakyn had nine days of radiation and started chemotherapy right away.

“I was in a fog; it was so fast and furious. I had to sign so many forms without really reading them. There are so many decisions to be made in those first few days! You are signing your child’s life away for treatments, side effects, waivers, acknowledging you know what things could happen, what long term effects there could be. I had no choice.”

Chemo lasted 28 weeks before he was declared to be in remission in August 2019. Haakyn’s remission lined up perfectly with the Pinky Swear triathlon. He was able to be honored as an All-Star and cheer his brothers, cousins, and friends as they all participated in the triathlon and crossed the finish line. It was a wonderful day!

“Then there was the Christmas event that Pinky Swear put on. We thought it was just a Holiday party, but once we arrived, we quickly realized it was not just any holiday party. It was true Pinky Swear; they catch you off guard and spoil your child and family in style. The way it was managed was amazing. The kids were taken to shop for one another and wrap their own gifts, which they just loved. It took us all totally by surprise. We left there that night and went straight to a church dinner, and my heart was so full because of what Pinky Swear had done that I started crying. I was just still so overwhelmed at what had just happened. You just never really know when you need something, when you are in the thick of the battle. It was that wonderful! Pinky Swear is unreal. We love them so much, and they just continued to support us all the way through on many different levels, big and small. After knowing so many cancer kids and their families, I believe this organization is truly living out what the dream for it was meant to be. They should be proud of that.”

“The absolute best thing about Pinky Swear and why we love it above all other non-profits, is that they were there right away. The support was immediate – Pinky Swear was almost stealth-like; there was no waiting until our child’s journey was near the end or over. They were there right away to give us support we didn’t even know we needed. When we received the Orange Envelope it caught us off-guard. In the beginning of a diagnosis, I believe every family goes through denial that they will need help at some point. It’s lost on them because they are in ‘fight mode’ with their child. My husband and I have had many moments contemplating the impact of an organization that just shows up without effort on our part; it’s very bittersweet, and it touches you right to the core.”

With Wilms Tumor, kids are scanned every three months for a long time, eventually spacing their scans out further and further. Happily, each time for Haakyn, there has been no evidence of cancer, and Haakyn remains in remission.

“During Covid, Pinky Swear helped us with a mortgage payment which made a significant difference with Haakyn’s dad not being able to work. We needed him home. With him normally gone 20 days out of the month, I could not imagine going through this journey without him here to help. There were tough days, busy days at the hospital, sick days, days when we did not know how to make it better. We needed him home so we could all be together. We also knew we would never get that time back and we had to make those days count. We also talked about an All-Star Weekend but then Covid hit.”

“Pinky Swear was there right away. When Haakyn was born, his birth was traumatic, and I could not have any more kids. We desperately wanted a fourth child, though, and put all our savings into possible adoption and surrogacy. Unfortunately, the surrogate lost the baby, it was the worst time of our entire lives, we had drained everything hoping for a fourth kid. It didn’t appear to the outside world that we needed help, but Pinky Swear saw we did and they were right there for us.”