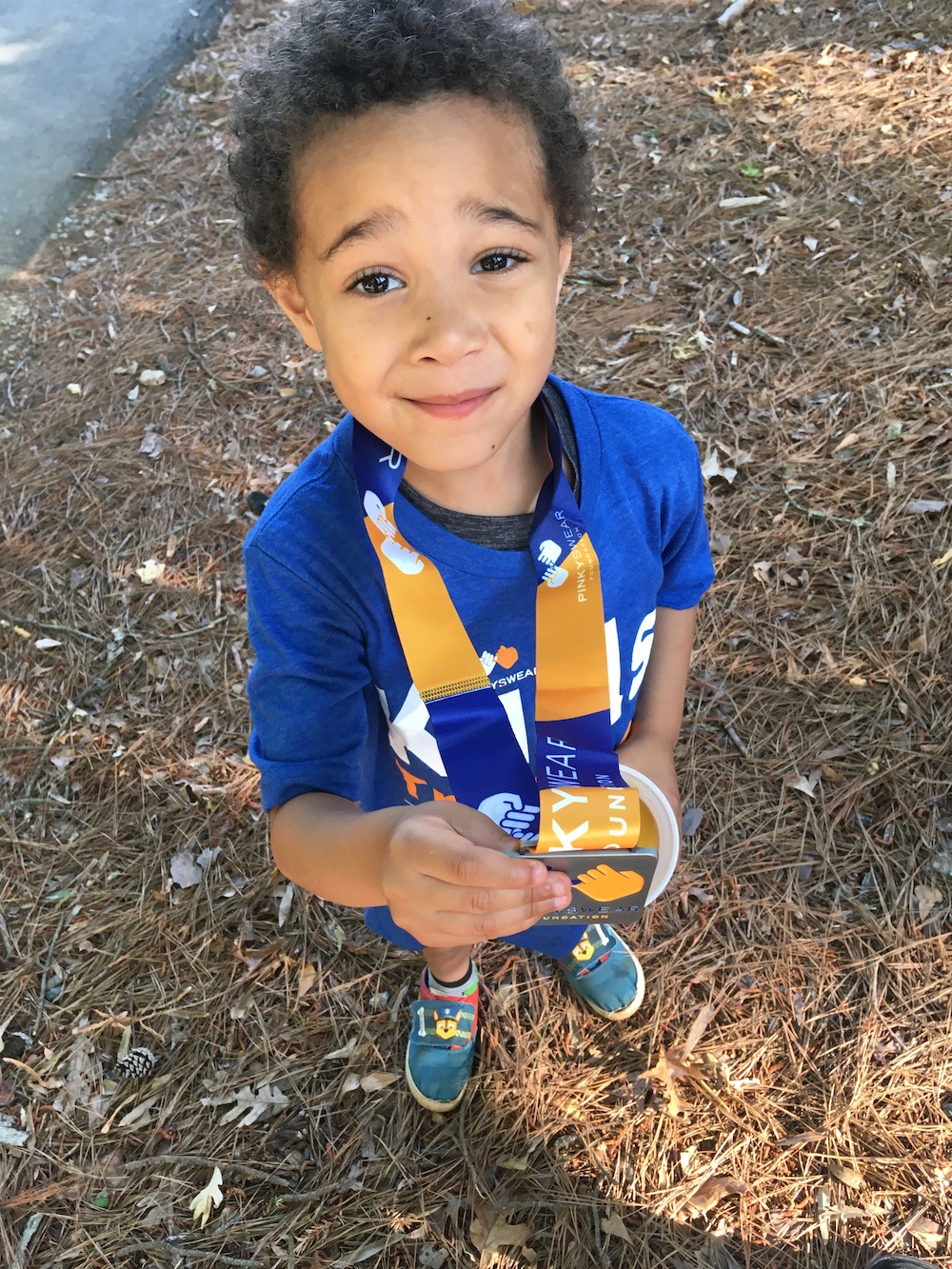 In addition to our family, friends, and church, Pinky Swear Foundation has become an integral part of our support system for Jackson.

“Jackson was a typical three-year-old boy who loved playing outside and learning” explained Jackson’s mom as she described what life was once like for her family. “I stayed home with Jackson and his younger brother, Hayden, and cared for another child as well. I was a full-time student through an online school. My husband worked as a store manager. We were all very involved within our church.”

In March of 2018, Jackson was diagnosed with autism. His parents spent the following months learning how to support his social and sensory needs, but they could not stop his constant migraines which resulted in nausea, staggering, and slurred speech. After multiple appointments and tests, Jackson’s family learned what had been causing Jackson’s symptoms: a brain tumor.

“After receiving the diagnosis of the brain tumor, as a family, we had to put our lives on hold,” shared Jackson’s mom. “It was really difficult leaving our youngest son with friends and family members while we were at the hospital with Jackson. We had to suppress feelings of guilt for not being able to give Hayden the love and attention he deserved, and it was hard for Jackson to not have his brother around.”

Jackson’s mom could no longer provide childcare for other families – resulting in a loss of income for the family – and was forced to put her schooling on hold. Taking care of Jackson became a full-time job.

“Worst of all, Jackson did not understand what was happening to him and why he had to go through all of this.”

Doctors successfully removed the mass from Jackson’s brain, but the surgery caused the left side of his brain to go into “sleep mode”. It took Jackson four months to re-learn how to walk, talk, and dress himself.

“Pinky Swear has been a huge factor in our family’s social and financial recovery,” Jackson’s mom expressed. “Shortly after our first post-operation clinical appointment, we received an Orange Envelope from Pinky Swear with a small financial gift as well as other material about the organization and supportive programs. It was reassuring to know that we had not been forgotten and that we were not alone.”

Since that initial Orange Envelope, Jackson has attended many Pinky Swear Foundation events like the annual kids triathlon and the annual All-Star holiday party. Not only do these provide kids like Jackson the opportunity to meet other kids going through the same battle, but it allows parents to connect and focus on something other than their child’s treatment.

Jackson is currently thriving in his Spanish-immersion kindergarten program and enjoys learning through jigsaw puzzles, mazes, math, and learning about the human body. He still has yearly MRI’s but there have been no further concerns since his surgery.

“In addition to our family, friends, and church, Pinky Swear Foundation has become an integral part of our support system for Jackson,” expressed Jackson’s mom. “The foundation has a genuine concern for Jackson and our family and checks on us regularly. We are so happy to be involved with Pinky Swear and to help promote this wonderful foundation and the people who support it.”