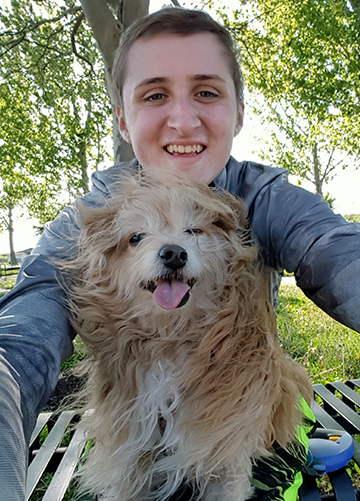 “He only complained twice during all of this,” Michelle says. “At the beginning, he asked, ‘Why me?’ Then, the night before the craniotomy, he woke up and said, ‘I don’t want to do this.’ But he did."

When eighth-grader Jackson Fisher woke up the day before his birthday in March 2015, he thought it was just another Monday. But he felt a little unsettled. It grew worse quickly, and he decided to stay home from school.

By the next Saturday, he was playing lacrosse. All seemed back to normal.

“But then he came home and said, ‘Mom, I’m seeing double.’ He was also having headaches. Then one eye started to close. Something was definitely wrong, so he went to the doctor,” his mother, Michelle La Brecque-Fisher, says.

Before long, the family received the diagnosis. Jackson had an aggressive nongerminomatous germ cell tumor growing in his brain.

Over the next year and half, the teenager endured 18 weeks of chemo, transfusions, two to three hours of MRIs, seven weeks of proton beam radiation and a stressful brain surgery last April.

The craniotomy was one of her son’s most challenging experiences, Michelle says.

“The surgeon got 99 percent out. The tumor had been as big as a racquet ball; now it’s only a millimeter. It is checked regularly to make sure the cancer isn’t back,” she says.

After seven intense weeks at Mayo Clinic in Minnesota receiving treatment for the deeply seated brain tumor, Jackson Fisher was back home and starting the 2015 school year late. It was well into October at Dowling Catholic High School in West Des Moines.

Jackson’s freshman-year return energized him, of course. His voice was filled with excitement as he recalled seeing friends and teachers at school again. These friends proved invaluable, helping him however they could and empathizing with his ordeal.

“I have lots of friends who are always asking me how I am doing and making sure that everything is good for me. They really care,” Jackson says.

While away, Jackson thought he would be following classes on his laptop computer via Skype, but the technology wasn’t up to the task. So he regrouped, following class topics online as best he could and inventing some of his own curriculum. It worked out.

“I wound up teaching myself, more or less,” the relaxed and chatty 14-year-old says. “For math, there was a workbook to follow, and I found out how much I like math. I really got interested in history. I had been reading a lot of mythology before, but I was surprised how much I liked true history.”

A Call to Pinky Swear

After Jackson was first diagnosed, a Child Life worker told Michelle about Pinky Swear and offered to call them for the Fisher family.

“I got a call from Colleen at Pinky Swear, and she started coordinating things for us. She was so helpful,” Michelle says.

“After the diagnosis, you don’t know what’s going to happen or how things are going to work out. It is overwhelming,” Michelle says.

With a younger son, Nash, at home, Michelle and her husband had to split duty. One would stay at home in Des Moines while the other was in Minnesota with Jackson. She jokes about passing each other on the freewayvonce a week.

“Every week we were spending about $1,400 for motels and travel,” Michelle says. “You don’t even really see yourself in that position until it happens. It was really good to have Pinky Swear step forward and help. We will forever be grateful for Pinky Swear and do whatever we can to help fulfill the pinky swear between Mitch and his father.”

In Jackson’s eyes, Pinky Swear has been a partner in his progress. He says he has been amazed at the promise between Mitch and his dad, and all the foundation does to help.

“They helped us pay for restaurant meals and gas to get up to Mayo and back. There were so many ways they helped. I love everyone at that foundation,” Jackson says.

“People were calling the radio station to donate, and I was one of the volunteers answering the phones. I talked to a lot of people about the foundation and made some great friends. It was really fun,” he says.

Participating in the radio event was a special gift to Jackson, Michelle says.

“Being there that day made him feel needed. It was good for him to be helping in something that let him give back,” she says.

Michelle is overwhelmed by the growth and maturity she sees in her son.

She describes him as a young man who never says a bad word about anyone. A super sweet kid, Jackson loves his dog and has become wise beyond his years.

“He only complained twice during all of this,” Michelle says. “At the beginning, he asked, ‘Why me?’ Then, the night before the craniotomy, he woke up and said, ‘I don’t want to do this.’ But he did.”

Among his most faithful supporters were the other kids facing cancer he has met at Mayo Clinic. These are the people who best understand what he has been going through, because they have gone through the same stressful steps to healing. They know all about the side effects of radiation, chemotherapy and surgery, which include pain, the loss of hair, dramatic weight changes and other difficult reactions.

“When I was having radiation and all that, I made quite a few friends. I met Nancy and Randy—they were my best friends—and other kids at Mayo, and they would help me out. We would talk. They are still my good friends,” he says.

One of his reactions to hospitalization and treatment seems to puzzle Jackson. Time moved quickly, he says.

“It’s like you do chemo and you have friends there, and it’s done and the stay is over. You make friends, then you have to leave friends,” he says.

Through it all, Jackson has had to grow up fast. He’s open about what has happened and looks for the good that he has discovered hiding in the difficulty.

“He’s learned a lot,” Michelle says. “He has a higher understanding of life than I will ever know.”

Love Your Melon is an apparel brand run by college students across the country on a mission to give a hat to every child battling cancer in America. A percentage of the net proceeds from the sale of all Love Your Melon products are donated to Pinky Swear Foundation to support kids with cancer and their families. Learn more >