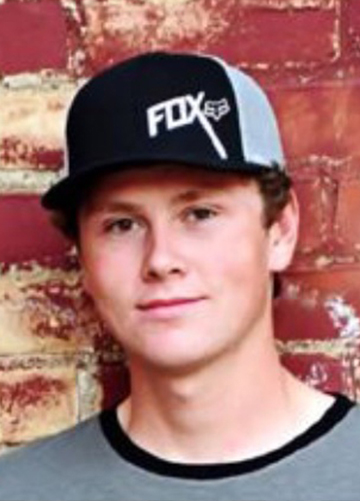 "I may be having radiation on July 4th, but watch out for a fireworks celebration when this bump is behind me in my black Chevy Silverado.”

In the middle of his senior year of high school, Jamison started feeling excessively tired. He could sleep 20 hours a day, but chalked it up to working at his after-school construction job and staying up late, as any 18-year-old might. Thinking it may simply be mono or Vitamin D deficiency, Jamison’s mom, Shanon, took him in for blood work.

The ER doctors ordered a CT scan and MRI, and on March 27, 2015, confirmed Jamison had a very large malignant germ cell tumor in the center of his brain.

Along with his family, Jamison traveled over 500 miles from Bismarck, ND to Rochester, MN to be treated. He underwent six cycles of inpatient chemo over five months, with three cycles in Rochester and three in Bismarck. They made many trips to Rochester, and stayed there for six weeks in the fall for proton radiation. Shanon started working part-time to take care of Jamison, his rehab and appointments.

Throughout his fight, Jamison has stayed positive and was excited to graduate from high school - albeit from a hospital bed - in June of 2015:

“Thanks for your support!,” Jamison wrote online. “This is my journal of my bump in the road and I'm looking forward to a newly paved highway with a bright horizon and successful future when I graduate from Bismarck Century High School in June, two weeks before my sixth and last round of chemo. I may be having radiation on July 4th, but watch out for a fireworks celebration when this bump is behind me in my black Chevy Silverado.”

The numerous trips back and forth from Bismarck to Rochester and reduced work hours put financial stress on the family. The Pinky Swear Foundation was able to assist Jamison's family with a partial payment to help with temporary housing costs, and a $200 gift card to help cover their gas and travel costs. In the Fall they went on an All-Star Weekend, so they could spend quality time together as a family, outside of the hospital.

“First of all, I can't even begin to tell you how much fun this past weekend was,” Shanon wrote of their All-Star Weekend. It was so nice to get away from the medical stuff for 2 1/2 days! Thank you so much for the welcome package. It made me cry, and Jamison kept saying, ‘Wow, wow.’ He and Tyler had a blast at Nickelodeon Universe. In fact, we were there until 11 that night. Jamison got to swim for the first time in over eight months because of his stomach tube. We all enjoyed the pool area. Thank you so very much!”

In November all of Jamison’s family and friends celebrated with a huge party in Bismark, and he spent Thanksgiving with family in Minnesota before a check in at Mayo. On December 2, his pediatric oncologist found no evidence of disease, and Jamison rang the remission bell.

“Jamison is in very high spirits after hearing the "R" word. And so are we,” wrote Shanon. “This roller coaster ride HAS to slow down a little now. I know that this feeling is one that all cancer families deal with and it's damn hard. I know it's going to be there at every appointment. I also know that at that moment, you feel like no one else is experiencing that feeling. The sad thing is, it's all too common.”