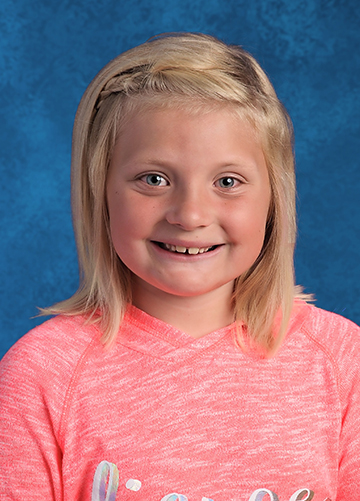 "It has made our family very cautious as life can change so quickly - and we don’t ever take our life for granted anymore."

Kinzie’s family of four was one that always worked and learned together, and had lots of fun. They had a regular routine of mom and dad going to work while their oldest, Kaydon, went to school, and little Kinzie went to daycare. Everything was “normal.”

But in 2011, three-year-old Kinzie was diagnosed with chronic myeloid leukemia.

“When Kinzie was first diagnosed I blamed myself because I felt it was my fault. How could I have let our daughter get cancer? I was thinking that she caught it just like you get a cold. I didn’t know much about cancer then because it was the first time our family had ever dealt with cancer,” recalled her mom, Stephanie.

While Kinzie’s parents feared the worst, her big brother was devastated. He didn’t want anyone to hurt his little sister, and his biggest fear was of her dying. But the struggles also brought their entire family together - not just the four immediate members, but also extended to grandparents, aunts and uncles.

Kinzie’s cancer diagnosis also affected the family’s financial stability, but for the negative. So Pinky Swear helped the family ­with financial assistance for gas and groceries in 2014, and an All-Star Weekend for the family to get away together and spend quality time outside of the hospital.

“Pinky Swear was so incredible by bringing our family to Minneapolis, and giving us the opportunity to experience the Mall of America. It was a trip our family had never done and it was such a cool experience! The kids keep talking about wanting to do it again,” Kinzie’s mom recounted.

The grant also gave them some financial stability while Stephanie was in Minneapolis for three months with Kinzie in the hospital. She didn’t have to worry about missing work, and was able to make ends meet while the boys were at home in Iowa.

“It has made our family very cautious as life can change so quickly - and we don’t ever take our life for granted anymore.”

Their family of 4 became a party of 5 when Kinzie’s baby brother was born in April 2013. The new addition to the family brought a huge benefit as they were able to bank the new baby’s cord blood – and it was a perfect match for Kinzie. With a cord blood transplant, her little brother was able to save her life, and she has had no evidence of disease (NED) since 2015.

“Pinky Swear is a neat foundation that we hope we can someday give back to because it means so much to our family,” Stephanie said. “It got us through some very difficult times!”