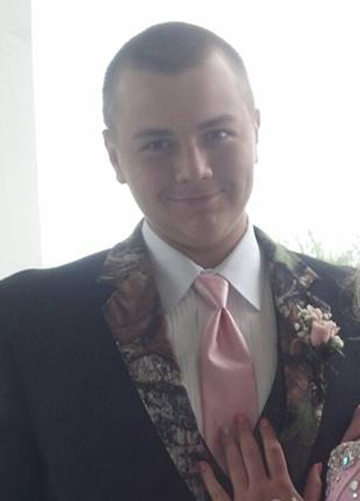 "Koby is the most kind hearted, loving, and compassionate person I know. He is my big teddy bear - as soon as I walk through the door he always meets me with the biggest hugs."

Seventeen-year-old Koby was headed into his senior year of high school and was playing double headers every night of the week. On July 22, 2015, his mom Traci took Koby to the ER thinking he may be having a gallbladder attack. An x-ray found something unexpected in his chest, so Koby was admitted directly to Children's Mercy Hospital in Kansas City, Missouri, for a series of tests.

There a 13cm x 12cm mass was found near his heart and lung, which they suspected was a form of lymphoma. With the placement of the mass, they had to decide the best and safest way for a biopsy.

The next morning, doctors placed a portacath under the skin of the right side of Koby’s chest. They biopsied the mass, and did a bone marrow biopsy. After 10 days and being admitted back into the hospital for blood clots, they still did not have enough information to get a clear diagnosis. Instead, doctors opened up Koby’s chest and went straight to the mass. He earned a night in ICU for his operation, and within 24 hours they knew it is Hodgkins lymphoma, a cancer of the lymphatic system, and a part of the immune system.

Cancer completely changed the family activity overnight. There was no more ball. While Koby normally volunteered every year at the local D.A.R.E. camp, he spent that time in the hospital getting chemotherapy instead. And during Koby’s stay in the hospital, his Legions baseball team won the Kansas State championship.

Naturally Koby is the kind of kid everyone loves when they meet. His girlfriend, Sarah, describes him perfectly.

"Koby is the most kind hearted, loving, and compassionate person I know. He is my big teddy bear - as soon as I walk through the door he always meets me with the biggest hugs," she said.

"He is the best big brother, and is very protective over his little sister, Haley. He always does things for others and asks for nothing in return. If you ask him to do something, he pretty much always will do it for you. He loves his family so much and you can tell! Koby is a die-hard baseball player. He is always either playing baseball or talking about baseball. When we are with our friends he is always making people laugh. Koby is very social, and he never meets a stranger when he is out."

Along with Koby no longer being able to play sports or do the typical things a teenager should be doing, they had to make three-hour round trips to the hospital for treatments and other appointments.

“How much more health can we take away from this this kid?” asked Traci. “He has already suffered through the loss of playing football when he had rod put in his hip the summer he was about to enter high school. And we live an hour and 15 minutes from the hospital, Koby’s dad and I both work out of town, and are living paycheck-to-paycheck.”

With medical bills piling up and other expenses that add more stress, the family has been fighting to stay functional. Pinky Swear Foundation helped pay a portion of their mortgage payment for two months so they didn't have that financial worry.