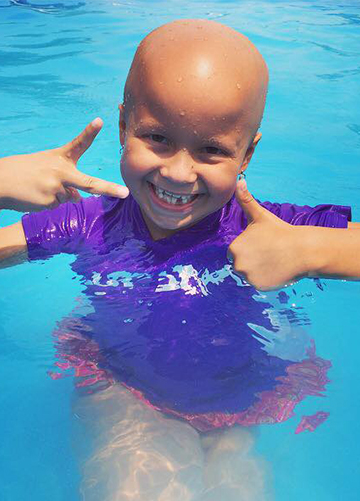 Caring for her two daughters, making it to appointments, and administering medications for Maddy was a full-time job in itself.

Maddy, also known as ‘Mighty Maddy’, has a smile that will melt your heart. A beautiful and spirited girl, she loves dancing and music. On top of being such a vibrant young individual, she’s also an older sister.

October of 2014, Maddy came down suddenly with a stomach bug. Taking precautions, her parents took her to the doctor. She was prescribed basic flu medicine and within a few days, Maddy seemed back to normal.

Despite the belief that the health issue was solved, it was only the beginning for Maddy.

Three days later, the symptoms showed up again, and much worse than before. After several tests, CT scans revealed a softball-sized tumor in Maddy’s kidney.

Maddy was only 6 years old when she was diagnosed with Stage 4 diffused anapestic Wilms tumor in the fall of 2014. A Wilms tumor is a rare kidney cancer that primarily affects children, touching one kidney at a time and sometimes spreading to other parts of the body. The prognosis for her disease is very poor, with a 33% survival rate with less than 5 patients surviving more than 4 years after onset of diagnosis. Due to these disparaging statistics, she endured months of surgery, radiation, and 41 weeks of chemotherapy. The process was grueling. Young Maddy had her entire right kidney removed as well as multiple lymph nodes in her stomach, with several lesions on her lungs.

Maddy’s mother, Libby, went on paid leave after receiving her daughter’s diagnosis. Unfortunately after 26 weeks, time ran out and she was unable to hold a position with her employer. Caring for her two daughters, making it to appointments, and administering medications for Maddy was a full-time job in itself.

The family found themselves needing help with basic needs. Pinky Swear, recognizing the essential need to put healthy food on the table, stepped in and presented the family with a $1,000 gift card specifically for groceries.