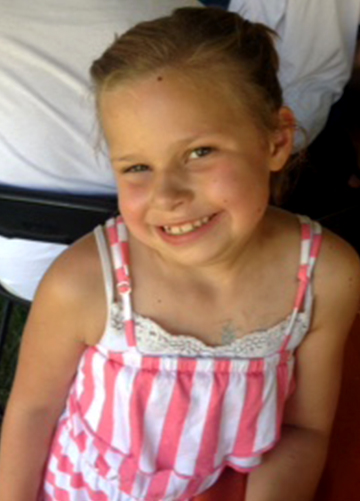 Nevaeh is heaven spelled backwards, and it’s a fitting name for a girl that is an angel on earth.

In August of 2011, 4-year-old Nevaeh suffered her first migraine headache. Her parents didn’t think much of it, but with a history of sinus infections and ongoing headaches, they went to the doctor and put her on an antibiotic. The headaches persisted, yet a sinus x-ray didn’t indicate any issues.

One weekend Nevaeh was so sick with flu-like symptoms and fatigue, she could no longer hold her head up straight. They headed to ER, and there they heard the news no parent wants to hear: brain tumor. A week later they removed the tumor, and their little girl received a diagnosis of medulloblastoma two days post-surgery.

After four months of chemo and eight weeks of proton radiation in Florida, things were looking up. But in June 2012 Nevaeh’s nine-month scans came back with the tragic news that the cancer had spread to her spine. It was even more devastating than the first time – their family knew all too well the trials and suffering that they would be facing all over again.

Nevaeh's parents, Tessa and Mike, had just opened thier own personal training studio prior to Naveah's diagnosis. Tessa had to quit working, while Mike worked as much as he could for the next three years. They also have two other children.

"Nothing can prepare you for news like that,” said Tessa. “You just turn numb. It was like my life basically crumbled at my feet.”

Pinky Swear Foundation supported the family during their cancer battle with grants for a mortgage and auto payment, and for expenses like gas and groceries. But the one who has never complained – and has the biggest smile through it all – was Nevaeh.

"It was a crazy, crazy road that she suffered. She suffered a lot,” said her mom, Tessa. “When you have brain cancer, you have thyroid issues, cataracts, and hearing loss. But you would never know it from her spirit.”

Today, Nevaeh shows no signs of disease. Now 8 years old, she continues her regular scans, all the while working to help other kids with cancer by hosting fundraising events and holiday toy drives, while building awareness of the difficulties of pediatric cancer with her story.

In July of 2015 Neveah bravely committed to participating in her first Hy-Vee Pinky Swear Kids Triathlon. To celebrate and raise funds, she decided to host a big ice cream party with princesses and super heroes. Before long news of Nevaeh’s story went viral, and over 1,000 people attended the party and raised $28,000 for Pinky Swear. Weeks later she raced and finished the kids' triathlon at Lake Nokomis, with the help of 18-year-old veteran racer and fundraiser, Anna Rice.

Nevaeh's parents are still in awe of their daughter's courage and bravery, but are even more proud of their daughter’s giving soul. Nevaeh is heaven spelled backwards, and it’s a fitting name for a girl that is an angel on earth.

"She’s got a big, warm heart, that’s what’s so amazing about her,” Mike said. “She’s such a blessing to our family.”