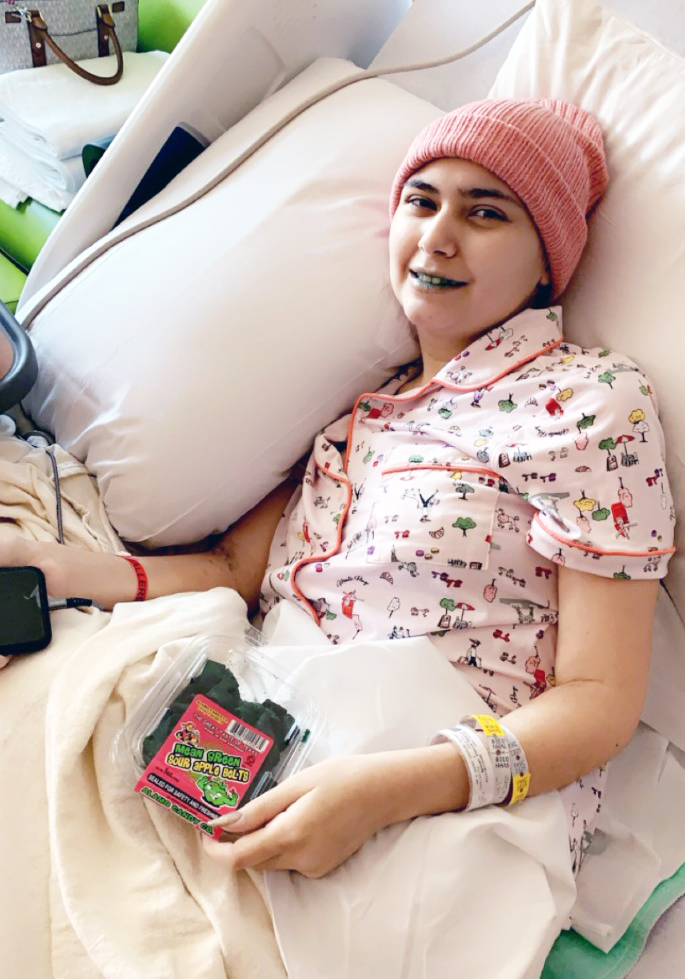 “You have no idea how much we appreciate your help, I have no words to express my gratitude. Especially now that we are moving hospitals and will be in Houston, eight hours away, paying our rent makes a huge difference. Thank you,” said Clarissa.

Nicole is now back at the Children’s Hospital San Antonio after being in remission for five years.

“I am more shocked by the relapse than I was when she was first diagnosed,” said her mom, Clarissa. “At least now we know what to expect and she knows the medications and the nurses; it’s all very familiar. But it’s extremely difficult to be back here. Nicole was 16 when she finished her treatment the first time around, now she is a young woman of 21 who had been getting on with her life thinking that cancer was behind her. In fact, Nicole was a Junior at Texas A & M with a plan to graduate in 2023. That plan is now on hold.”

Nicole was 13 when she was first diagnosed with Pre-B Acute Lymphoblastic Leukemia.

“That day she was super excited to go a country music concert. She had a fever, so I kept her home and gave her Tylenol. Then, at her dad’s house, she fainted and they took her to the hospital. They did bloodwork and her counts were all over the place. We live in Laredo, Texas, and they gave us a choice to go to the hospital in San Antonio or the one in Corpus Christi; we chose San Antonio. We went straight there by ambulance, and we had nothing packed. They did a bunch of tests that night. The fact that it might be cancer had not crossed our minds. Nobody had ever had cancer in my family, her only symptom was that she was always tired, so I thought she was just being lazy – a typical teenager. We ended up just staying at the hospital, which was three hours away from home. Eventually I had to ask a friend to take me back home to get things. At that time, I had two little ones, ages two and three. I had to ask my mom to watch the two babies,” explained Clarissa.

“We saw a different team of doctors. They just flat out told us that it was cancer. Nicole’s dad was there too. I was in total shock, and I was crying. My daughter never once cried or showed any emotion though.”

“We were in the hospital for about two months, and we had no choice but to stay in the area. It was close to a year before we got to go home for a little bit. We had to stay within 30 minutes of the hospital in case she had a fever, so the two of us stayed at the Ronald McDonald House and the little ones stayed with my mom. She would bring them to visit us, but it was quite a while before I saw them. Then it was just weekends when they were able to visit. It was very tough being separated from my babies like that and tough on my mom too.”
“I had just opened a hair salon, but I had to sell it to get some extra money. I lost the house and the car. When we finally went back to Laredo, we had to get an apartment. The little ones lived with my mom; she was raising them. We ended up buying a little car eventually with an income tax refund. The first year we were pretty much in the hospital. In year two we were at the Ronald McDonald house, and in year three we were able to go back and forth to Laredo and we got the apartment. Cancer takes its toll on the whole family. When the younger ones started calling my mom ‘Mommy’ that was especially difficult.”
“Nicole was transitioning into a teenager; she was 13. It was very hard because I was trying to split myself between my sons and her. At about the time she did her last chemo, I started experiencing a lot of PSTD from all that had happened. My heart would race, and I was often anxious. We went to the hospital every day and I felt like I was dying; my headache lasted for a year without subsiding. Somehow my body kept going. I was running on adrenaline. I know you have to take care of yourself, but that’s so difficult when you have a sick child to care for and little ones at home without their mom. I got admitted to hospital, but they couldn’t find anything wrong, it was all about my mental health.”

“I wish that Laredo had more medical choices. It would have been so different had Nicole been treated close to home. I did so much driving trying to see my sons when I could, the tires were the first things to go. Eventually I got used to the drive. It helped me think a bit better and have time to myself. Even if you have a good car, normal wear and tear happens fast when you are driving so much.”

Nicole did not get the chance to be a normal teenager, and she missed out on so much. She’s naturally quiet and doesn’t like to talk much about her cancer diagnosis.

“I had no income coming in and so Pinky Swear provided us with a sigh of relief. You have so much time just sitting at the hospital, a lot of time to think. Support helps a person get through the day. When in the steroid phase, they crave certain foods: everything spicy because she couldn’t taste hospital food. I had to go out to buy those foods; you want to do anything you can to make your child comfortable.”
There was very little assistance available to us, and it’s even harder now that she is being treated for her relapse. Just to be okay, we need a lot more assistance. We are currently trying to get Nicole ready for a transplant, but she needs to be in remission first, and at the same time we are trying to get clearance from insurance to start testing.

In April Pinky Swear Foundation was able to help Nicole’s family out with a rent payment. “You have no idea how much we appreciate your help, I have no words to express my gratitude. Especially now that we are moving hospitals and will be in Houston, eight hours away, paying our rent makes a huge difference. Thank you,” said Clarissa.