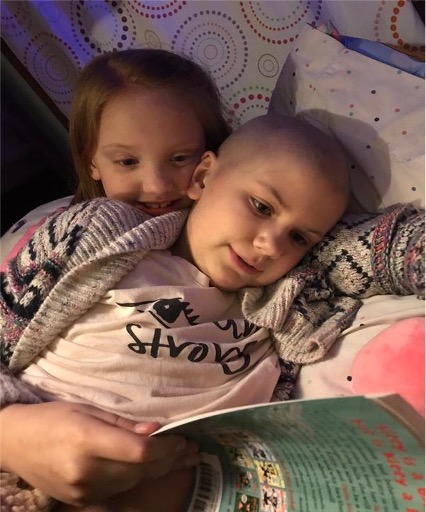 Olivia was admitted to the hospital 7 additional times, but 4 were just for high dose chemotherapy. For each of those chemo admissions, she would stay a week. She was turning 9 on October 20th and was given the choice between spending her birthday or Halloween in hospital. She chose her birthday, what a choice for a 9-year to have to make!

Olivia was a healthy little girl, she and her sister Eleanor love to play competitive softball which they did from February to July every year. “We noticed that she started running more slowly, was limping and walking on the outside of her feet,” explained Olivia’s mom Dana. “She couldn’t extend her arm all the way. So, we took her to the orthopedic doctor on the Friday before the 4th of July 2017. They ran some tests, and her platelets were 7000, the normal level is 100,000. We knew that something was badly wrong.” The doctor told them that it could be lupus or leukemia. “You want it to be leukemia,” the doctor said. “That’s a good kind of cancer.” Dana and Tim didn’t exactly welcome that news!

They were told to go to the ER as a direct admission and so they dropped Eleanor at her grandparents’ house. Immediately Olivia was put in a wheelchair, given an IV and her parents explained to her that her blood might be sick and so she needed some medicine. On July 3rd, two days after her hospital admission, the family’s worst nightmare was confirmed, 90% of Olivia’s blood was lymphoblastic. “It was a complete out of body feeling,” explained Dana. “Right away Olivia started feeling awful, she had a reaction when they gave her platelets and had to be offered special medication.” She was in hospital for 11 days. Then they got the news that there were chromosomal abnormalities and therefore she was very high risk. The family’s nightmare was just starting and already getting worse.

They made it through Christmas. Then Olivia got a 104-degree fever and found herself back in the hospital and was admitted to the PICU room. That evening her heart rate was so high and her oxygen saturation levels were so low that she was given a sedative and put on a ventilator. “Eleanor had always been her biggest cheerleader and donated her hair twice but when she was on the ventilator Olivia didn’t want her little sister to see her. They are very different, but they love one another very much,” said Dana. “Olivia is our rule-follower whereas Eleanor is our day-dreamer.”

Olivia was hospitalized for a month. She had to re-learn how to walk, how to throw a ball, they gave her things like slime to build up her hand strength. She got pancreatitis from her life-saving chemo and had to get all her nutrition through an IV, she couldn’t ingest anything. In one year, she gained and lost 70lb. That illness pushed her back 5 or 6 months. She was then on a maintenance protocol until October 2019.

After being in the hospital in early 2018, Olivia went back to school part-time and ultimately started home schooling. It was around that time that Dana lost her job, “I had exhausted all my family leave, Tim had just started the firefighter academy and he couldn’t miss a single day, having switched out of insurance to do something he always wanted to do.” The family was fortunate that the hospital was so close though, at least allowing Dana the opportunity to drop and pick up Eleanor at school.

Right from when Olivia was diagnosed, Dana started researching support groups for Eleanor and for the family. “I wasn’t sleeping and spent many nights online. It was there that I came across the story of Mitch. I bawled my eyes out.” The family received an Orange Envelope!

It was very hard to accept help though. Dana knew, however, that they had do it if they were going to survive. She applied for a mortgage payment. Then the social worker told them about All-Star Weekends and the family said Yes!

“Among our goodies from the All-Star Weekend was a Chick-Fil-A gift card, I was pregnant with Teddy, and I stopped by to get breakfast that week after our amazing weekend away. I was sitting in the parking lot and suddenly my phone pinged. It was an email from Pinky Swear telling us that they were paying an additional two months of our mortgage. I sat there and I ugly cried, it was an amazing blessing.”

Teddy was such a welcome surprise. Olivia was especially thrilled when her parents told her and her sister about halfway through the pregnancy. She was growing up and it was a relief to have some of the focus shift away from her. The summer after Teddy was born, Tim lost his position right before training was over since he had used too many days off during Olivia’s treatment, which is 2.5 years! Dana talked to their social worker about assistance, and she suggested reaching out to Pinky Swear again and they graciously awarded them another mortgage payment. Since then, Tim is happily working for a neighboring town as a Paramedic-Fire Fighter and loves being home every night with his family.

Dana is now training to be a nurse, she has always worked in healthcare and realized that she was naturally very interested in every medical detail of Olivia’s treatment. She finished by saying, “Pinky Swear cares so much about us and our children. That shines through everything you do. I am completely so very grateful to all you guys for everything.”

Olivia is nearing her 13th birthday in October. When I look at her, she looks like a typical middle school student. She is thankfully doing as well as can be expected for 7th grade. Olivia is also playing volleyball for her school. At home she likes to bike, ripstick, craft, camp, fish, and hunt.

If you just met Olivia, you would never have known that she endured almost 3 years of chemotherapy for leukemia. Under the surface, she still deals with the after effects of chemo. Liv has a "wonky" shoulder from the abundance of steroids that cause bone deterioration but also pushed the cancerous cells out of her marrow so the chemo could kill them. Chemotherapy is a double edged sword.

It's been almost a year since she really complained of foot pain from her stress fractures and AVN - Avascular Necrosis- dead bone. Because of the steroids she suffered from metabolic imbalances as well. When her feet were injured, she wasn't able to be as active as her medical team wanted. Now, she tries to be as active as possible and loves being a 7th grader.