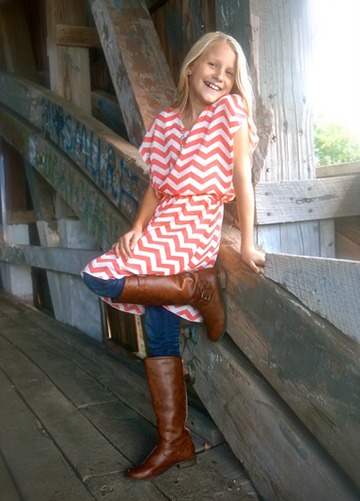 Paige endured 29 weeks of chemotherapy, before having surgery on her ninth birthday. She never once said "Why me?," or complained about going to have chemo for so many weeks.

Eight-year-old Paige was in second grade, and up to typical second grade adventures, while her older sister Mylinda was in fifth grade and playing JO volleyball. Her mom and dad both worked full time. Between jobs, school, and volleyball they did not have a lot of spare time, but it was a normal family, busy with normal life activities.

One Sunday night, Paige complained that her neck hurt, and they assumed it was just a ploy to sleep with mom and dad, or swollen lymph nodes. But when her mom examined her, she noticed a lump on the back of her neck that didn’t seem right. She set up an appointment the next day just to be safe. After an ultrasound and CT scan, the doctor knew something wasn't right, but had to await findings from a specialist in Fargo. The next day they were called first thing in the morning for a meeting with the doctor in Fargo. There, Paige was diagnosed with cancer - but she still needed another MRI, CT scan, bloodwork, PET scan, biopsy, bone marrow test, spinal tap and a port put in to find out what type of cancer it was.

For a girl very afraid of needles, it was terrifying. And Paige’s mom, Chasity, said there is only one word to describe how they felt that day: “Devastated.”

They waited three long weeks to get a proper diagnosis of a Desmoid Tumor, a soft-tissue tumor that arises from connective tissue as a single, slowly growing mass. Not knowing what they needed to do and taking it one day at a time was extremely challenging for a family that was accustomed to planning activities out weeks or months in advance. And Paige’s family had numerous family members previously diagnosed with cancer, and had seen them succumb to the disease. They were scared with the uncertainties of the future and where the diagnosis would lead her.

Paige endured 29 weeks of chemotherapy, before having surgery on her ninth birthday. She never once said "Why me?," or complained about going to have chemo for so many weeks.

“She is such a selfless little girl and always wants to help others. She doesn't have a selfish bone in her body,” Chasity described her daughter.

Paige was going for routine MRIs every three months, when in June 2014, they discovered her tumor had returned. Her doctors were very nervous because the tumor was a half inch from her spine, making her case a little more delicate than normal. They headed to Indiana for eight weeks of proton radiation therapy.

Paige kept her positive outlook during treatment, but was disappointed she was unable to start fifth grade on time. Meanwhile Paige’s mom took a leave of absence from her job, while her father stayed home in Minnesota to work.

Beyond being devastated and worried that Paige's tumor returned after two years, Paige’s parents were extremely nervous about how the bills would be paid with only one income. Pinky Swear Foundation gave Paige’s family a grant for a mortgage payment during their two months in Indiana.

“With the generosity of the Pinky Swear Foundation, our families, and our amazing employers, the weeks flew by and bills were paid with no delays. We will be forever grateful for everyone's support!” said Chasity.

Since Paige's first diagnosis in 2012, the family has grown much closer and appreciative of every day – from the simple to the crazy ones. They have also grown to understand and empathize with other families that are going through the challenges of a child diagnosed with a life threatening illness.

“The support given to each and every family is so important,” remarked Chasity. “The biggest adjustment for us was just taking life one day at a time. In ways, we consider it a blessing, because we learned to appreciate everything we have been given, and to not take anything for granted.”