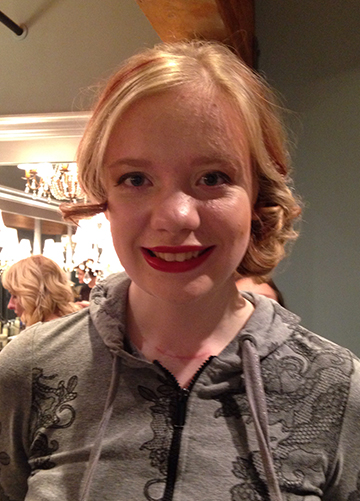 The fun surprises, going to the Mall...But the best for us was ordering in pizza and cuddling up as a family to watch a movie.

Fourteen-year-old Sanibel had been complaining about her throat feeling "off" for a few months. Her mom, Natasha, suspected it was allergies but didn't think too much about it. Then in May, Natasha's mom was diagnosed with thyroid cancer. So when Sanibel's dad was bringing her to a check up with her pediatrician the following month, her mom asked him to mention her scratchy throat. That's when Sanibel's pediatrician found a lump on her thyroid, too.

An ultrasound and biopsy followed, and with that Sanibel's thyroid was removed on July 30, 2015. While she was scheduled to be there one or two nights, she ended up in ICU due to low calcium levels for a week-long hospital stay.

To add insult to injury, Sanibel has a genetic mutation that makes her cancer more aggressive. Thankfully they found the University of Minnesota Masonic Children's Hospital specializes in pediatric thyroid cancer, which accounts for less than 1% of thyroid cancer.

"Having your child have cancer is life changing. It is still surreal my baby girl has cancer," says Sanibel's mom, Natasha.

"I am so proud of how Sanibel is dealing with cancer. She has been brave and gracious, and her faith has sustained her. However, this diagnosis has rocked our world! It isn't just your child having cancer - it affects your entire family. Our 10-year-old son Jack is on the Autism Spectrum, and worries with severe anxiety everyday about Sanibel dying. We are working to support him, but it is really hard. Our other son and Jack's twin, Aric, also struggles. He worries about taking care of everyone and we just want him to be a kid and have fun! My husband has missed weeks of work between surgeries, treatment, ICU and countless appointments."

After the summer of struggle with Sanibel and Natasha both battling thyroid cancer, Pinky Swear was able to offer their family an All-Star Weekend 'staycation.'

"I felt like it was the first time we had been a family around nothing to do with medical things," Natasha said of the experience. "The fun surprises, going to the Mall...But the best for us was ordering in pizza and cuddling up as a family to watch a movie."

Pinky Swear also provided help with one month of household expenses to take away some financial pressure as Sanibel went through treatment.

While Sanibel is off her thyroid replacement medication and on a special low-iodine diet protocol, she was too sick to start her freshman year of high school. Instead of taking school tests in September she had medical tests, including hospitalization to take a radioactive pill. After she came home she still had to be careful to not touch her family, as it truly makes her radioactive. A full body scan one week later showed three spots of cancer; under her chin, behind her windpipe and where her thyroid was. Sanibel will repeat this process in December, at which point it will be clear if the cancer is growing or shrinking, and they can determine the next treatment from there. Regardless Sanibel will be re-tested for cancer for the next five years.

"Our faith holds us together. We are so thankful for friends and family, as well as Pinky Swear. No one can fight cancer alone," says Natasha. "It is a very hard and emotional journey."