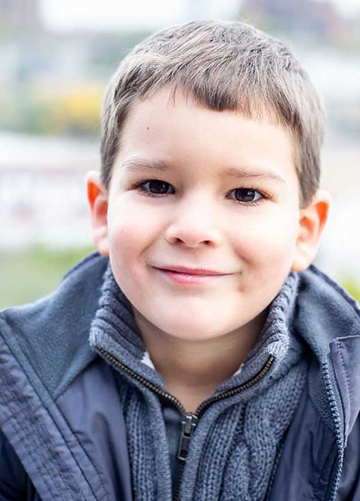 “We are so grateful for their gifts and understanding of what our family has experienced and continues to fight during our battle with Santi’s cancer.”

Santiago (nickname Santi) was a typical 3-yr old. He loved to crack jokes, play video games with his older brother (specifically Super Mario Bros.), and enjoyed playing at the park.

Wednesday, July 5, 2017 Santiago began suffering from severe pain in his throat, jaw and chest. After numerous abnormal blood test results, he was referred to the University of Minnesota Children’s Masonic Hospital for further testing. Within hours of being admitted, Santi was diagnosed with Acute Lymphoblastic Leukemia (B cell). His brave fight, along with his family’s, with cancer began. Day three of being diagnosed Santiago’s dad wrote in a CaringBridge update to family and friends, “It’s been a range of emotions, but the one thing that’s always been consistent is Santi’s bravery, his strength and our hope that he will overcome this.” Santiago endured painful and sleepless nights alongside of his chemo treatments before and after being discharged from the hospital. Due to the chemo, he became very nauseous, tired and lethargic. His family missed his carefree boyish spirit, his mom wrote “We missed our funny boy.”

Even after enduring various phases of Chemotherapy, Lumbar Punctures and Bone Marrow tests – his bravery never faltered. He got tired, mad and sad but his parents explained how important it was for his body to have help to beat the cancer. They told him that the chemo treatments were like soldiers that had to go into his body to fight - a visual understanding of why he felt so sick and weak after receiving treatments. Once he began his “maintenance phase,” Santi was able to go back to preschool, start a summer camp and, “he’s just as silly,” said Santiago’s mom.

Pinky Swear Foundation was able to grant Santiago and his family an All-Star Weekend, which his mother said, “Every detail was thoughtful and deliberate.” Then went on to mention, “We are so grateful for their gifts and understanding of what our family has experienced and continues to fight during our battle with Santi’s cancer.”