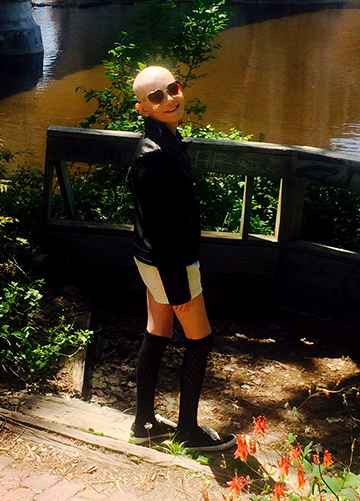 She would meet someone having a harder time than herself and say, "Whew, Its just cancer."

Sydney is the youngest of "Irish quads,” or four kids born in five years, from Williston, North Dakota. Syd had a tummy ache one day, and her mom suspected it was because she had pulled a muscle from cheerleading, but made a doctor's appointment just in case it was something more serious like a hernia.

The doctor found something on an ultrasound, followed by a CT-scan and an MRI. When the words came on March 26, they paralyzed Sydney and her family: “It could be cancer.” They had to be in Minneapolis in 15 hours.

They headed out on the train from Williston that night at 8:00 pm, arrived in Minneapolis at 11:00 am, and met with the surgeon at 4:20 pm that day. They had Sydney’s grapefruit-sized tumor removed at 9:00 am the following morning. With no options available for temporary housing in Minneapolis, her mom ended up staying at a hotel for nearly two months before renting a dorm through Spring. The financial set backs began adding up between rent, meals, and regular day-to-day necessities. Additionally, her vacation time had run out, she was on her own without a car, and being away from the rest of the family was torture. They were hanging by a thread.

Finally, Sydney and her mom moved into The Ronald McDonald house. Sydney handled all of the transitions with amazing grace and a truly unique spirit. She made many friends, and quickly became the nurses’ favorite because she was less worried about her condition and more about how she might help someone else. She would meet someone having a harder time than herself and say, "Whew, Its just cancer."

Currently, Sydney and her mom travel back and forth between home and the clinic, but are stretched financially and waiting for the other shoe to drop. Human Resources notified Sydney’s mom that she will be out of a job in December, despite the fact that she went back to work to keep her insurance. Meanwhile the bills are coming in, and Sydney’s dad is working overtime for weeks on end before taking her to her appointments when he's able. Despite the domino effects of the stress, Sydney has a smile on her face and is ready to face any challenge put in front of her. Pinky Swear was able to help support Sydney and her family with a mortgage payment and an All-Star Weekend.

Don't miss out on Sydney's video on ellentube.