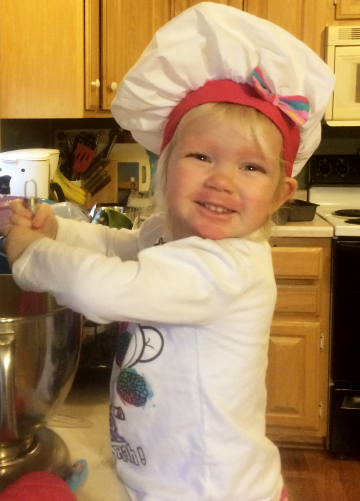 “Everything moved so quickly once she started chemo that we didn't have a lot of time to worry, so most of our energy went towards taking care of Taylor and her brother, and helping her fight.”

With a two-year-old son and arrival of a new baby girl, Taylor, family life was normal, but busy. Taylor’s dad did double duty as a full time social worker and grad school student, while her mom stayed home the first few months after her birth, and then returned to work part time. They went to the park, played outside, and went for walks.

But her parents knew at just six weeks of age that something wasn't right with Taylor. Her disease is so rare that it was originally misdiagnosed as something less serious. When she wasn't getting any better, they had further testing done and Taylor was diagnosed with myofibromatosis at 6 months old. She continued to get worse, and then finally at 14 months, they discovered the disease was also in her lungs – and that's when she started chemotherapy.

“We were obviously scared and very worried, but to be honest we also felt some relief that we were starting to get some answers and get on the correct path towards treating Taylor,” recounted her mom, Erin. “Everything moved so quickly once she started chemo that we didn't have a lot of time to worry, so most of our energy went towards taking care of Taylor and her brother, and helping her fight.”

Taylor's cancer experience has affected the family in many ways. Living in northern Minnesota, they spent countless hours on the road to appointments in Duluth, Rochester and Minneapolis the first year. Some weeks they were traveling up to five days a week for treatment, a minimum of 70 miles each way, if not longer

Pinky Swear stepped in to provide some emotional and financial support to Taylor’s family with gas and grocery gift cards, and an All-Star Weekend.

“The weekend getaway was such a great experience for our family. It gave us a break to spend time with just her and her brother and we didn't have to worry about any appointments or any of her medical issues. We were able to swim, eat dinner at Mall of America and spend time at the aquarium there, too. It was such a relaxing weekend and we appreciated a break from "real life" for a few days,” recalled Erin.

Taylor has been on chemo since 14 months of age, and just turned 5 years old in July of 2016. This has been her whole life and she continues to fight. Unfortunately, there is no end in sight right now for Taylor's treatment. They found this Spring that the tumors in her lungs have returned for the third time. In early July they received insurance approval for Taylor's new medication and were able to start the med in July. So far it has been going well. She was able to start Pre-k this fall, but her immune system is not as strong as her classmates , so they are hoping she will be able to attend school - especially throughout cold and flu season.

“We value family time even more than we have in the past and try to give her and her brother as many normal experiences as possible, but also make sure to do as many fun family activities as we can," explained her mom, Erin. “Her experience hasn't only affected her but also her brother, who has dealt with my husband and I being gone frequently for doctor’s appointments, tests, chemo, etcetera. We try not to sweat the small stuff and definitely do not take anything for granted.”