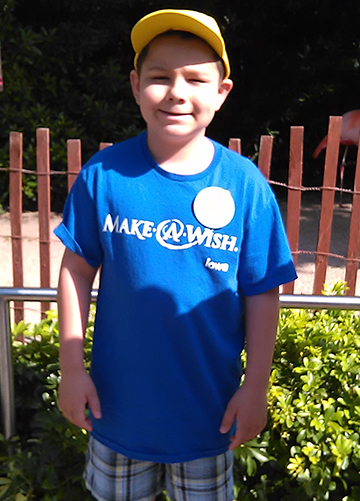 “I was standing next to his bed in the hospital room. He looked at me while tears ran down my face and said, ‘Mom, it’s going to be alright. I will get better and we can go home’.”

Eleven-year-old Tristin was raised in a happy, loving, energetic family. Despite Tristin’s sister being deaf and blind, it did not stop them from staying active and living a busy lifestyle. Sunday afternoons in the spring and summer would be spent by the lake. While Tristin and his father went fishing - one of Tristin’s favorite things to do - his mother and sister would explore the beautiful surroundings.

During spring of 2014, Tristin became sick with a fever and severe sore throat. They kept him home from school for a few days, and called his pediatrician as directed by staff. They were told that after a few days of rest, Tristin’s symptoms should subside. But four days later, the symptoms had only worsened, and his mom noticed he was unusually pale and had unexplained new bruises all over his body.

It was a Monday when Tristin’s family took him in to see the doctor. While he tested positive for strep throat, questions were still unanswered. Blood work was done and antibiotics were prescribed. The doctor informed them that they would be contacted if the results from the blood work caused concern.

Tristin’s mom, Kimberly, woke up at 3:00 am to comfort her daughter, who was having trouble sleeping. “As I tended to her, I had a very unusual and very strong feeling in my gut to check my phone,” she explained.

Kimberly’s intuition was correct. Several missed calls and voicemails from Tristin’s doctor awaited her on the phone charging downstairs. Filled with urgency, she promptly called the doctor back, and what he said made her stomach drop. A sharp pain shot through her heart and tears began to roll down her face as she heard the news no mother wants to receive. The University of Iowa’s hematology/oncology pediatric staff were expecting Tristin’s arrival at 5:00 am, and the family headed out to Iowa. The nightmare had begun.

Bombarded by doctors, specialists and other pediatric staff, Tristin and his family were overwhelmed. Quite a few more tests needed to be done, including a bone marrow biopsy. By the end of the day, the nightmare became reality. At 8 years old, Tristin was diagnosed with a rare and aggressive form of T-cell Acute Lymphoblastic Leukemia. ALL is a cancer that starts from the early version of white blood cells called lymphocytes in the bone marrow, and can progress fairly quickly.

These words hit Tristin’s parents like an oncoming train. Sad, hurt, confused, and devastated, they questioned why this would happen when their hands were already so full. Did they do something wrong? Were they being punished? And how would they afford to take care of their family of four during Tristin’s treatments? Within one day, their whole world was turned upside down, and the road ahead stretched long.

Shortly after the diagnosis, Tristin began the process of blood transfusion, due to his low hemoglobin level. Kimberly remembered the day: “I was standing next to his bed in the hospital room. He looked at me while tears ran down my face and said, ‘Mom, it’s going to be alright. I will get better and we can go home’.” She knew he didn’t completely understand the immense adjustments that would have to be made in order to fight this battle.

Putting one foot in front of the other, Tristin and his family knew that they had to be prepared for the best and the worst, staying positive and receiving encouragement from family and friends. They refused to let this beat Tristin, but the plate was getting too full.

Tristin’s parents have love/hate relationship with Chemotherapy. “I loved that it was hopefully going to kill this ugly word they call ‘cancer’,” said Kimberly. “But at the same time, I hated that it was going to tear our son to pieces.” Twice a month, the family drives 60 miles to the University of Iowa Medical Center for treatments. Tristin’s older sister also has frequent visits to the same hospital for her vision impairment and seizure disorder.

“Reality hits and it hits hard. Bills and car payments and house payments don’t stop coming in every month. We were at our lowest with everything,” Kimberly said. She had to take a long-term leave of absence from work to focus on her two children.

Then Pinky Swear Foundation jumped in. To lessen the financial burden for Tristin’s family, Pinky Swear paid a month of the family’s rent in summer of 2015, and helped with a car payment when Tristin’s dad was off work for a few months due to shoulder surgery. This helped the family get back and forth to Tristin and his sister’s treatments and emergency appointments.

Tristin’s fight is not over yet. He still has over a year of treatment to go, not finishing up until summer of 2017. The family is staying extremely positive and says their son is doing very well.

“He’s still rocking it out and shining like our little star. I have no doubt he will beat this,” said Tristin’s mom. “Thank you, Pinky Swear, from the bottom of our hearts. We hope you can touch and bless many more lives and families to come!”

presented by love your melon

Love Your Melon is an apparel brand run by college students across the country on a mission to give a hat to every child battling cancer in America. A percentage of the net proceeds from the sale of all Love Your Melon products are donated to Pinky Swear Foundation to support kids with cancer and their families. Learn more >