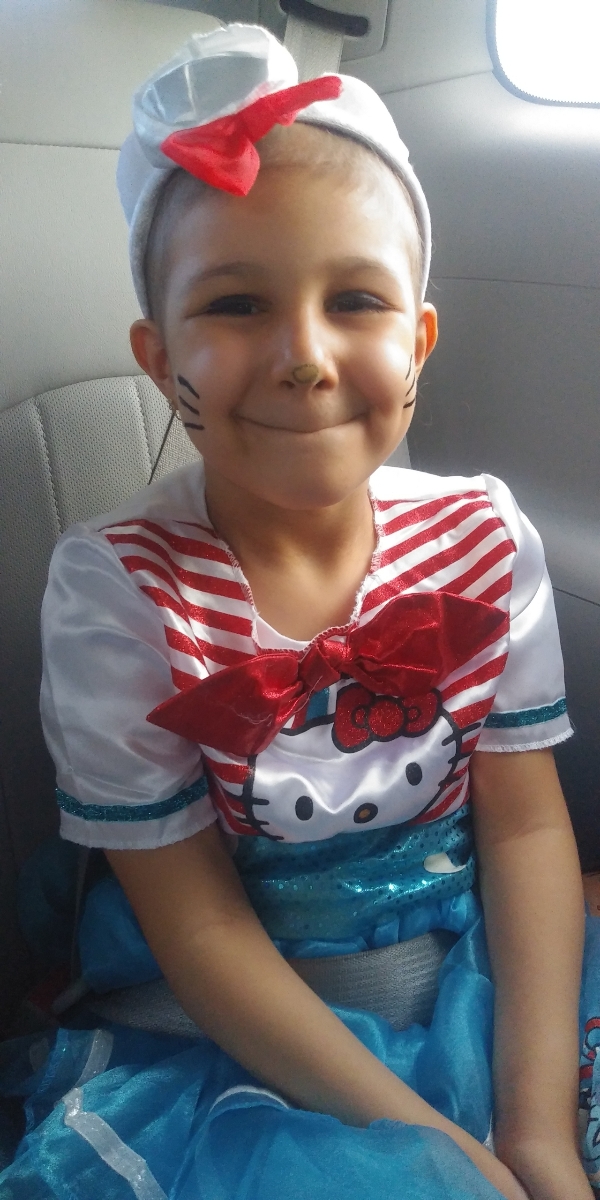 One day Marieluz noticed bruises on her daughter’s legs. She asked her if she had fallen, but she had not. Then red dots appeared, but Victoria had not been scratching herself although she complained that her legs were itchy. Then she started coughing.

Victoria was diagnosed with Acute Lymphoblastic Leukemia on 6th March 2020, one week before the Covid-19 pandemic was announced in the United States. The family had just been told that, because of her cancer, they would need to isolate and wear masks, so they could only reflect on the irony of everyone being told that they needed to do that just a few days later.

“Victoria absolutely loved school, dance and swim,” explained her mom, Marieluz, “and so Covid made it easier to explain that everyone was having to miss these activities, not just her. On the other hand, it was very scary and stressful constantly cleaning and knowing that Covid could kill her!”

The family lives in Tamarac, Florida, about one hour from Miami; they moved from Venezuela about 20 years ago. Marieluz and her husband are both hair stylists, and Victoria, now seven, has a little sister, Violetta, who is just about to turn five. Marieluz’s mom (Victoria’s grandma) is also temporarily living with the family as a necessity while Victoria is in treatment.

“She helps with things like cooking and looking after the little one. She would love to go home at some point, but for now it’s where she has to be,” explained Marieluz.

One day Marieluz noticed bruises on her daughter’s legs; she asked her if she had fallen but she had not. Then red dots appeared, and Victoria complained that her legs were itching. Then she started coughing. After two weeks, they made a doctor’s appointment.

“We all went together,” Marieluz said. “They did some blood tests and then said that they wanted us to go straight to the hospital. Victoria has just completed her dance class, and it was dinner time, so we stopped to eat on our way to Joe Di Maggio hospital, which is about 45 minutes away, and took the little one home to my Mom.

At the hospital, Victoria underwent more tests and the family was told that she had a virus.

“One of my husband’s clients is another type of doctor in the hospital,” said Marieluz. “He said, ‘It looks like she has a virus, nothing to worry about.’ Then he came back two hours later and told us that something else was now showing. He called my husband outside. Next a female doctor came in and said very coldly, ‘Your daughter has leukemia.’ I looked outside the room and my husband was crying. The doctor said, ‘You just have to follow a treatment plan.’”

Marieluz told her husband to stop crying and that they had to stay strong and follow the treatment plan. Little Victoria, sitting in the hospital, was still in her dance clothes.

“They then explained the treatment and I touched the floor,” said Marieluz. “It would take two-and-a-half years, a port would be inserted in her chest, and she would not be able to go to school. All that was very hard to accept; it was too much information all at once.”

For the first few months Marieluz did not work. She spent her time reading stories of other children, feeling guilty about what she might have done to cause this, and feeling very isolated. Meeting other moms through Momcology helped, and she realized that she was not the only one in this situation.

Victoria was just five years old when she was diagnosed.

“She is just magical, a very easy girl, very smart. Even the doctor would say, ‘Wow, she eats so well for a child going through treatment.’ She was scared of the hospital, but very calm and trusting, and she always went along with the procedures without complaining or making a fuss.”

For three months Marieluz stayed home and didn’t work. She and Richard decided each would work part-time – one in the morning and one in the afternoon. They were not making the same money, but the arrangement worked for the family.

Pinky Swear Foundation was able to give the family an Orange Envelope when Victoria was first diagnosed, also paying the family’s mortgage in February 2021.

“Anything helps; it releases you. We can’t work like before. Our income is less and we have to go to the hospital twice a week. We are paying a lot more for gas and adding miles to our car, having to get new tires and brakes more often. We are worried about money, but Victoria’s health is the priority; it’s all that’s important. We try to be as positive as we can. When she is up, we are up.”

Victoria is not back at dance class yet, but she plays the piano, which relaxes her. She loves listening to music and painting.

Victoria will be finished with treatment and able to ring the bell in June 2022!