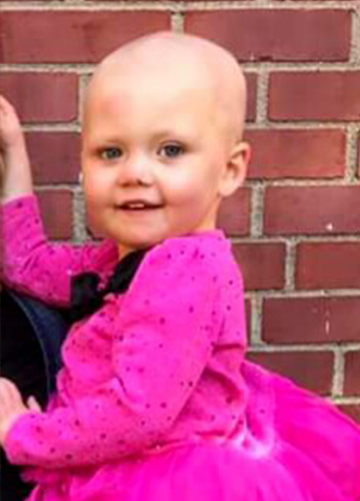 “Pinky Swear also helped provide us with a place to go after Zoey’s first hospital visit by paying rent at a new apartment. It was a huge relief not to have that worry among our already troubled minds.”

Prior to being diagnosed with cancer, little Zoey was advanced for her age. She was very motivated to have an adventure, was eager to please, and expressive - usually a goofy and happy toddler.

So when Zoey got sick in March 2016, her parents kept thinking she would get better. But when they brought her in she was severely sick and lethargic, and her parents did not know what to do.

“We knew it was serious when they asked us to sit down and talk,” explained her mom, Melissa. “To get the news of cancer was surreal. It was a whirlwind of emotion - mostly scared for the future.”

Along with being diagnosed with acute lymphoblastic leukemia (ALL) in April 2016, Zoey was suffering from sepsis (complication of staph infection in blood), E. Coli, a urinary tract infection, Aspergillus infection on her nose, and sinusitis.

Zoey’s parents learned to schedule around the many appointments and anticipate the drop in her immune system, and planned accordingly. This often lead to having to decline spending quality time with family and friends. Every time Zoey went back to the hospital, she left with a new setback in walking, or new difficulties. Naturally they lived in fear of the next time she might get sick, and dreaded hospital stays.

Zoey’s dad works part time due to a disability, while Melissa was an unemployed student. Living on social security already made it hard to keep up with the monthly bills and debts, and their housing situation was going to be up in the air after Zoey’s hospitalization.

“Pinky Swear has been great for having things for Zoey during hospital visits - like bag of toys and other things that brighten her day - and make the hospital a better place to be,” said Melissa. “Pinky Swear also helped provide us with a place to go after Zoey’s first hospital visit by paying rent at a new apartment. It was a huge relief not to have that worry among our already troubled minds.”

“We try to be positive and celebrate the small victories,” said Melissa.

Throughout 2016 Zoey had been on IV nutrition, chemotherapy, steroids, antibiotics, anti-fungal and saline drip, and receiving physical therapy. In September, after another month in the hospital, she had surgery on her leg and removed tissue. She has since made it home, and enjoyed the holidays with her family despite taking chemotherapy at home and in clinic. She has finally healed the open leg wound, but continues physical therapy and using a walker for severe muscle atrophy. With that Zoey has learned how to re-walk, for the second time.