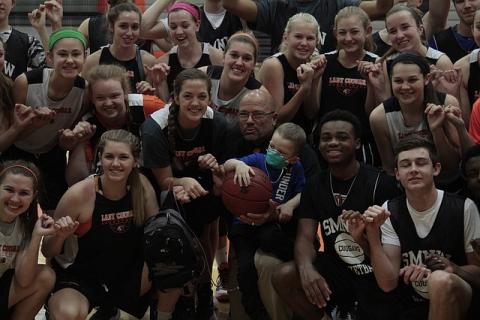 By NoahPosted on January 18, 2016October 15, 2020Cat UncategorizedLeave a comment

Shawnee Mission Northwest High School’s winter sports teams each gained an “All-Star” when they returned to practice from winter break, and the Cougars have been champing at the bit to get them more involved in their respective game plans.

SMNW officially partnered with the Pinky Swear Foundation on Jan. 11 by adopting 3-year-old Matthew Martin and 11-year-old Gabe Putthoff, both of whom are battling cancer. The Cougars are taking part in the organization’s Playing For Pinky Swear campaign, which allows sports teams to raise funds and compete in honor of the All-Stars within the Pinky Swear program.

Playing for Pinky Swear is just an opportunity for student athletes to kind of wrap their hearts around these families and just let them know that they’re not alone in their fight and that somebody is thinking about them and caring about them,” said Nikol Terrill, a representative for Pinky Swear in Kansas City.

Connecting with the cancer community

While the SMNW boys and girls basketball teams have adopted Gabe, and the boys swimming, wrestling and bowling squads have reached out to Matthew, the cause they are supporting goes well beyond the two All-Stars.

This isn’t just about Matthew that we’re helping. We’re talking about awareness, we’re talking about fundraising,” SMNW athletic director Angelo Giacalone told the SMNW basketball teams when introducing the 3-year-old. “It’s all the kids at Pinky Swear, but Matthew is the one that we’ve been able to get a hold of.”

All of the SMNW winter sports teams had the opportunity to meet Matthew, and his mother and grandmother — Amanda and Sharon Moore — before their respective practices on Jan. 11. Martin was presented with SMNW team T-shirts from wrestling coach Howard Newcomb and swim and dive coach Dave Pfortmiller, and watched some of SMNW’s wrestling and boys basketball practice.

That’s who they’re wrestling for every week, and every time they step on the mat,” Newcomb said after the Cougars’ dual victory over Olathe East on Wednesday.

Prior to venturing over to SMNW for the Cougars’ kickoff of Playing for Pinky Swear, Matthew already had an eventful day of treatment. Matthew — who was diagnosed with a form of leukemia called pre-B ALL in April — wakes up at 6 a.m. every day to take his medications and then spends most of the morning and afternoon in a hematology clinic. The 3-year-old has lived with his mother at the Ronald McDonald House in Kansas City since starting his treatment.

Since April, I haven’t worked,” explained Amanda Moore, who hails from Warrensburg, Mo. “We spend every day at the hospital, so there’s no way that I could work. They (Pinky Swear Foundation) helps me pay some of my rent for a house that we can’t live in but we still have to maintain, so they help financially cover my rent payment back home.”

Although Moore acknowledged the monetary benefits of Pinky Swear have helped her out with non-medical expenses, one of the best benefits from the organization was seeing the excitement in her son’s face while meeting the SMNW athletes. Matthew was full of energy as he challenged SMNW wrestler DeVonte Smith to a race around the gym and shot some baskets with Giacalone on the side of the SM Northwest boys basketball practice.

You don’t have to look any further than Gabe to see how the awareness of childhood cancer has been raised over the past decade in Shawnee. The 11-year-old Shawnee native was diagnosed with Stage 4 neuroblastoma at age 2.

Gabe has been a past participant in the Shawnee/Lenexa Relay for Life with parents Josh and Trisha Putthoff, and will be recognized prior to the SMNW boys basketball game Feb. 9 against Lawrence High School. The Cougars have not had the chance to meet Putthoff yet, but SMNW boys basketball coach Mike Rose said the players are looking forward to welcoming him with open arms. Putthoff will join the Cougars on the bench when they take on the Lions.

“You’ll be hard-pressed to find a family where somewhere along the line (it) hasn’t had to deal with that,” Rose said of cancer’s impact. “I’m sure that we will discuss that more when we get Gabe in and we get to talk a little bit more about it with just how many lives it does affect. It’s important for us to take time out and reflect on all of that.”

The idea of Pinky Swear came to fruition 12 years ago in Minnesota when 9-year-old Mitch Chepokas realized the burden that cancer can take not only take a toll on the person battling the disease, but their family as well. Mitch — who was also battling cancer — heard another child crying on the hospital floor he was on, and brainstormed about what he could do to change that.

“That family wasn’t going to have money for Christmas presents this year, so Mitch was sad by that,” Terrill said. “He asked his dad, ‘What can we do?’ and his dad said, ‘You know, buddy, that’s their business. We should stay out of it.’ He (Mitch) was like, ‘No, I have money in my savings account. Can I take money out of my savings account and give it away?’ And his dad said, ‘OK, if that’s what you want to do.’”

Mitch then went with his father, Steve Chepokas, to the bank and shared the Christmas spirit by giving out money to fellow cancer patients.

“They got $6,000 — all of his money — out in $100 bills and delivered it in envelopes that said, ‘I love you — Mitch,’” Terrill said. “They delivered it to the bed-side tables and under the blankets and pillows to the kids in the hospital.”

However, that Christmas would be Mitch’s last, as he passed away four months later. But he made an agreement with his dad that Mitch’s act of kindness would be something to build open for years to come.

Mitch asked his dad to promise — to pinky swear — that he would help kids with cancer even after he was gone,” Terrill said. “That’s what his parents have decided to do with their life. So that’s how Pinky Swear started.”

Since Chepokas’ promise was put in motion, the Pinky Swear Foundation has given grants in 22 different states. In the Kansas City area, all children who visit a pediatric oncologist at Children’s Mercy Hospital or Kansas University Medical Center are qualified to receive grants from the Pinky Swear Foundation. SMNW began raising money for the beneficiaries of the nonprofit organization last week by selling orange bracelets with PINKYSWEAR.ORG and #KEEPER encrypted in black, as well as face tattoos of the Pinky Swear logo for $5 donations. After each person donates, they are encouraged to sign their name on a Pinky Swear portable posterboard that will been taken to different athletic events.

Senior girls basketball player Brenni Rose is one of the SMNW students who has taken the initiative to sell the bracelets and face tattoos during her lunch period. She has a desire to become more and more involved with the Play for Pinky Swear movement.

After one week of fundraising, SMNW has raised more than $500 to support the Pinky Swear All-Stars in the Kansas City area. Along with supporting the All-Stars financially and welcoming Matthew to the team, Newcomb wants his wrestlers to think about the 3-year-old’s daily struggles in comparison to lesser challenges they have as student-athletes.

I just say, ‘Hey, next time you’re feeling sorry for yourself, think about this little boy who is battling cancer. There are a lot of kids who have to go through that,” Newcomb said. “It just drives home that factor, and it’s starting to bring them together a little more because they realize that cutting weight, not feeling good in the morning, not feeling good at practice, whatever — there’s a big difference in what is going on there (with Matthew).”

While the message of Pinky Swear and how it positively impacts children such as Matthew and Gabe has been well-received by the Cougar athletes, Giacalone has made it clear that their All-Stars have another home away from home.

“This is where you all wrestle. This is your turf,” the SMNW athletic director told the wrestling team. “This is Matthew’s turf. I’m very excited that we have two All-Stars who are a part of our Northwest family.”
Source: Shawnee Dispatch