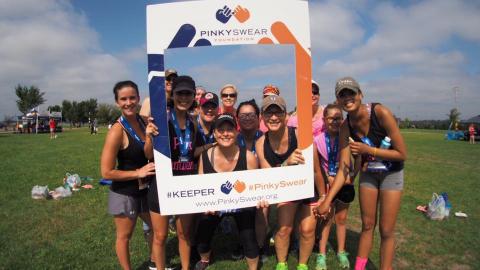 On a gray day in Minneapolis in 2003, Steve and Becky Chepokas suffered the devastating loss of their son, Mitch, to cancer. From that barren ground of grief, a charitable organization and thriving altruistic event has bloomed – the Pinky Swear Foundation and its road race for children.

Rather than competition, the event focuses on cooperation, participation and charitable activity. It’s the fifth of six Hy-Vee Pinky Swear races that will be held in Midwest cities this summer to raise money to support children with cancer and their families. Last year, more than 2,000 children participated in five such events, raising more than $350,000. Organizers couldn’t speculate on the financials this year, but said they were pleased with the increased turnout.

“We’ve had an outstanding turnout and it’s been a terrific day,” said Erica Campbell, executive director for the foundation. “We’ve had an incredible partnership with Hy-Vee, great weather and a lot of people coming together for a great cause.”

A foundation was born after Mitch Chepokas asked his father to promise to help other families with children suffering from cancer. As per their tradition, they sealed that pact with a pinky swear, which led to the foundation’s name. Since that time, the foundation has raised more than $5 million. Hy-Vee became involved in the event in 2015.

For those organizing the event, the cause is personal as well.

“My daughter had (cancer) when she was 16 so I know what families go through and how lives are turned upside down,” said Mary Core, regional direction for the foundation. “It’s rewarding that we can help these families to ease the financial burdens they face when they’re already under enough stress. And it’s really a good feeling to see how many people show up and help.”

“I’m happy because it’s for a good cause,” said Jennifer Jacobs, 7, of Davenport. “And I like to run.”

“It was awesome,” said Josh Pestka, 20, of Davenport. “It’s a great feeling running for kids in need.”

“My husband and daughter are both cancer survivors,” said Deanna Woodall of Bettendorf. “Unfortunately, not all people make it, which is why events like this are so important.”

“We can relate, my husband died a year-and-a-half ago from a rare blood cancer,” said Caroline Branham, 53, of Silvis. “This really hits home.”

Ashley Werthmann of Davenport was among a large group of athletes running for her stepbrother, Jarin Satterly, 18, who is battling Stage 4 cancer.

“He was diagnosed June 20, so this is new to us, so we thought we’d do this to help support him,” Werthmann said. “It’s an amazing event. A lot of times you don’t know what you can do to help, and an event like this helps you run for those who can’t.”