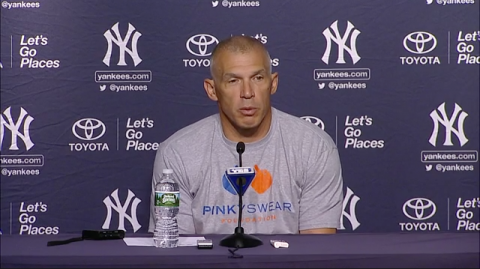 Score a VIP Yankees Stadium Suite Ticket with a $150 Donation

Join the New York Yankees, Wiley Wallaby Australian Style Liquorice, Nutrisource Pet Foods and the Pinky Swear Foundation in a VIP Yankees Stadium Party Suite, and help support kids with cancer and their families. For each $150 gift made through August 31, donors will receive a ticket to a VIP Party Suite on Sunday, September 17, 2017 to watch the New York Yankees take on the Baltimore Orioles at 1:05 pm. Each ticket, valued at $400, includes food, beverages, and a chance to meet former Yankees players, and six Pinky Swear All-Stars – brave NY-area kids battling cancer. The Yankees are also providing special access to pre-game batting practice and complimentary game tickets to All-Stars Ezra and Maui and their families at upcoming games.

Everyone can get involved to help support the Pinky Swear mission, and join the VIP party suite on September 17. For each $150 donated, one VIP suite ticket will be provided (no limit). Donations must be in by August 31, 2017, and tickets will be sent on or about September 1, 2017, courtesy of Wiley Wallaby Australian Style Liquorice and Nutrisource Pet Foods, proud official partners of the New York Yankees and Yankees fans everywhere.

Give online at https://pinkyswear.org/yankees to make a donation securely by credit card, and join the Yankee Stadium VIP Party Suite on September 17!

Pinky Swear Foundation was founded in honor of Mitch Chepokas, who lost his battle to bone cancer in 2003. In December 2002, 9-year-old Mitch overheard his pediatric oncology ward neighbors stressed about money for Christmas gifts, and generously decided to give away his savings – $6,000 – to other kids fighting cancer. After sneaking envelopes of cash under doors and on nightstands, Mitch told his dad it was the most fun he’d ever had, and he wanted to do it again the following year. With a terminal prognosis, his dad had to tell Mitch the truth: that he wouldn’t be around the following Christmas. That’s when Mitch made his dad, Steve, ‘pinky swear promise’ to continue to help families with kids with cancer even after he was gone. To date, over $13 million has been raised to support brave kids battling cancer in 46 states.

Founded in 2003, Pinky Swear Foundation is a 501c(3) not-for-profit passionately committed to helping children with cancer and their families by responding to the immediate crisis facing families with a childhood cancer diagnosis. Pinky Swear supports families’ quality-of-life with financial assistance for basic needs and through experiences that create emotional support, so they can focus on what’s most important: their child battling cancer. Inspired by a pinky swear promise made between a 9-year-old boy and his dad, the foundation engages kids to help grow the community of keepers of the pinky swear. Pinky Swear Foundation fundraising activities include annual kids triathlon events, the Hy-Vee® Pinky Swear 5K & Fun Run events in five communities nationwide, National Pinky Swear Day on December 11, and other community engagement events around the nation.

KLN Family Brands is the parent company of Tuffy’s Pet Foods and Kenny’s Candy & Confections.  Nestled in beautiful Perham, Minnesota, KLN Family Brands manufactures super premium Nutrisource Pet Foods and great snacks like Wiley Wallaby Australian Style Liquorice. Giving back has always been a priority for this family-owned business and we continue to share that vision today. A portion of every KLN Family Brands purchase is put back into the community and the company has committed $1 million to the Pinky Swear Foundation. www.klnfamilybrands.com