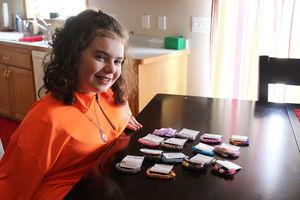 Pinky Swear All-Star gives back to other kids fighting cancer

When Taylor Breimhorst of Shakopee was only 6 years old, the Pinky Swear Foundation helped her family through the nightmare of learning about and getting treatment for Taylor’s brain tumor.

Now, 12-year-old Taylor has been tumor-free for 15 months, and she is working to give back to the organization that was there for her in a time of trial.

“It makes me feel like I’m doing the right thing when I help,” Taylor said.

Taylor’s mom, Denielle Breimhorst, said the Pinky Swear Foundation (formerly Miracles of Mitch) came through for her family when they most needed help.

In 2007, Taylor was diagnosed with celiac disease, which prohibits her digestive system from processing gluten. Then, in 2009, doctors found a tumor that had calcified around Taylor’s pituitary gland. They removed the tumor and her pituitary gland, which helps control growth.

When Taylor was just 7 years old, she and Denielle moved to Florida for three months for Taylor’s radiation treatments. Taylor’s dad, Craig, and her siblings, twins Kendyl and Andrew, stayed back in Minnesota.

During that time, the Breimhorsts not only had to pay for the mortgage on their home in Minnesota, they also had to pay for housing in Florida. That’s where the Pinky Swear Foundation came in.

“They paid one of our mortgages for us,” said Denielle.

Not only did the organization help the Breimhorst family financially, it helped bring joy to their lives in a very stressful time.

“They do Minnesota Miracle,” explained Denielle. “They gave us a weekend at the Minneapolis Hilton, and we had two rooms and it was full of toys for the kids. They also gave us gift cards for the Mall of America for that weekend.

“They help with anything a family can possibly need during the fight.”

To raise money for the Pinky Swear Foundation, Taylor makes and sells colorful bracelets for $1 to $3 each. Last year she raised $1,000, and so far this year she has raised $800. Her goal is to raise $2,000 by August, when she will participate with her team, Taylor’s Warriors, at the Hy-Vee Pinky Swear Kids Triathlon.

“I make rainbow loom bracelets, and I donate the money,” said Taylor. “I don’t take any money for myself. Last year, I was bouncing up and down when we made our goal.”

Taylor, with the help of Denielle, is also hosting a pancake breakfast to raise money for the Pinky Swear Foundation. The breakfast is from 8 to 10 a.m. on Saturday, May 2, at Applebee’s in Bloomington, located at 9601 Lyndale Ave. S. Tickets are $8, and RSVPs to taylors.warriors@gmail.com are appreciated.

A silent auction will take place alongside the pancake breakfast, complete with Minnesota Timberwolves merchandise, an autographed piece of sheet metal from Jeff Gordon’s 2014 racecar, an authentic Jimmy Johnson team crew shirt, signed Minnesota Swarm merchandise and a plethora of merchandise from Mary Kay, Scentsy, Norwex and the like.

Taylor is thrilled to be feeling healthy again, but more than anything she is thrilled to help other kids who are experiencing the stress and pain of cancer.

“It makes me feel good to help, because I know what they went through,” Taylor said. “Sometimes now I get so happy I just jump around in my room.”