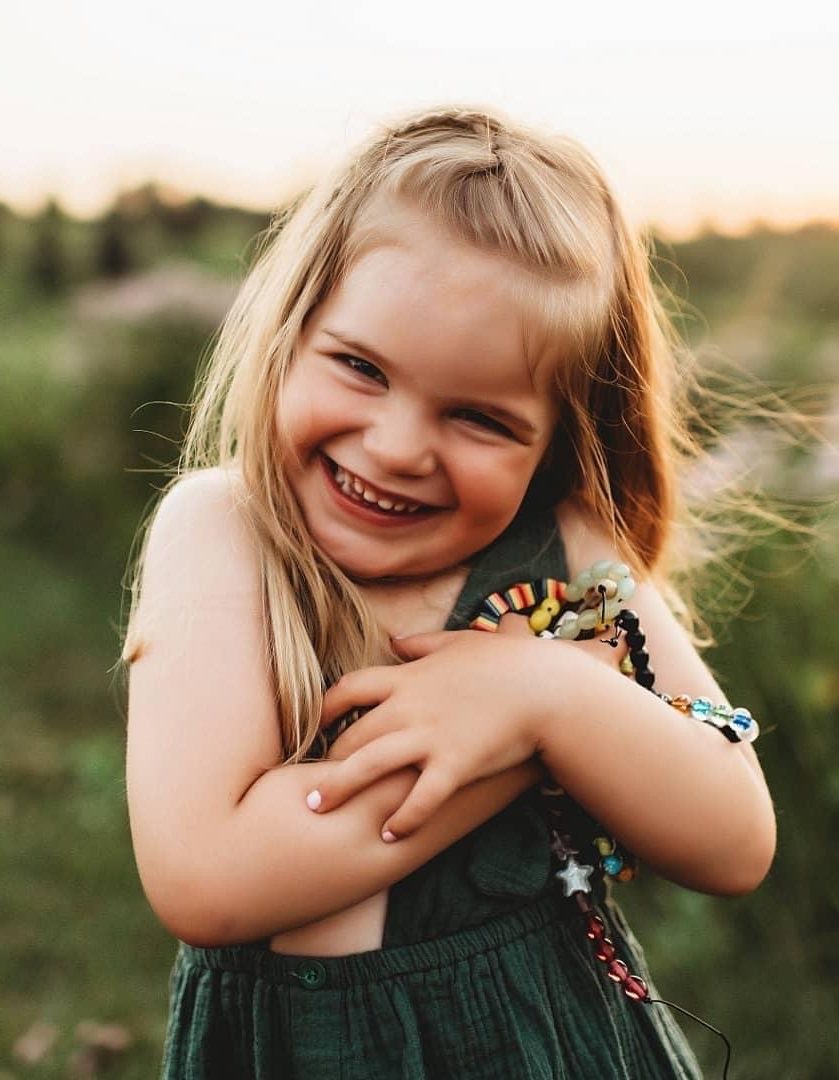 “Brandi was caring for Reese, so I reached out to organizations that may help. What Pinky Swear did for our family was incredibly helpful. Food and gas were our top priorities during treatment.”

Reese’s journey began when she was only 16 months old. Reese was healthy and the only thing that seemed off was that she had not taken her first steps.  Her parents tried physical therapy, followed by an x-ray of her hips to rule out hip dysplasia.  That came back fine, so her pediatrician took a closer look.

When Reese could only grab a dollar bill with her left hand, the doctor knew something was neurologically wrong and ordered an MRI. She was still in her scan when her parents got the call that she had a large mass on her brain.

“We were told that Reese was being admitted and prepped for brain surgery. They needed to debulk the tumor and send it in for pathology. Reese had a seizure the next morning. It was the scariest thing.”

“The doctors told us it was Anaplastic Ependymoma and gave her a 32% chance of survival. All I could think was, ‘32% of children survive, she will beat this,’” said Brandi.

Another CT scan revealed that the cancer was already growing back. They wanted to start chemotherapy.

“Everything was happening so fast, but we decided to get a second opinion. The neurosurgeon at the Mayo Clinic was adamant that she should have a a second craniotomy to remove the remainder of the brain tumor. We decided to trust our gut and do the surgery. The doctor came out and told us that he had removed all visible signs of the tumor!”

Brandi’s role was kept open, and Eric was able to take leave from his job.

“Mayo is about three-and-a-half hours away,” explained Eric. “We made the trip as a family, and we were there for six weeks.”

Brandi was not getting paid, and the family was facing many additional expenses, including gas, and eating food out.

“It helped tremendously,” said Eric. “We had two kids who needed snacks, and we all needed meals.  When your child is facing a life-threatening illness, the last thing you want to worry about is money. Every little bit helps. Brandi used the money to buy healthier snacks instead of feeding Reese fast food. You know you need help, but you don’t want to ask and you’re not even sure what you really need,” said Eric. “Brandi was caring for Reese, so I reached out to organizations that may help. What Pinky Swear did for our family was incredibly helpful. Food and gas were our top priorities during treatment.”

“Family life was never going to be the same. Reese’s diagnosis and treatment completely changed our mindsets.”

But when her radiation ended, they were told to go home and try to find a “new normal.” Brandi was eventually able to work part-time and also care for Reese who now had more needs. Eric returned to his job.

Reese is now seven years old and enjoying first grade. She is thriving and cancer free! She does not let the deficits from her tumor and treatments slow her down.

“Although last May we celebrated five years with no evidence of disease, it is still very real for us that her cancer will never be in remission,” said Brandi. “Her type of cancer is very aggressive and is known to reoccur even 10 years later. She continues to be tested every six months. Her checkup in September revealed another clear scan.”

“We were in survival mode for so long and now we are finally starting to shift our focus to long-term quality of life goals,” explained Eric. “This checkup we were able to meet with some amazing doctors who gave us options to help Reese. We will return to Mayo in November to their gait lab to assess the issues with her right leg and see if surgery is an option.”

“We are doing as well as anyone could probably expect,” said Eric. “On the surface we are a normal family but there is a lot we still deal with behind the scenes. What helps is knowing we have our faith and the support of our friends and family. We have also been blessed with another beautiful daughter, two-month-old Baylor.”

“Reese will never be cured of this ugly disease, and we will always face the fear of reoccurrence, but her bright light continues to shine and to spread hope and radiate joy to everyone she meets” said Brandi. “To know Reese is to love her.”