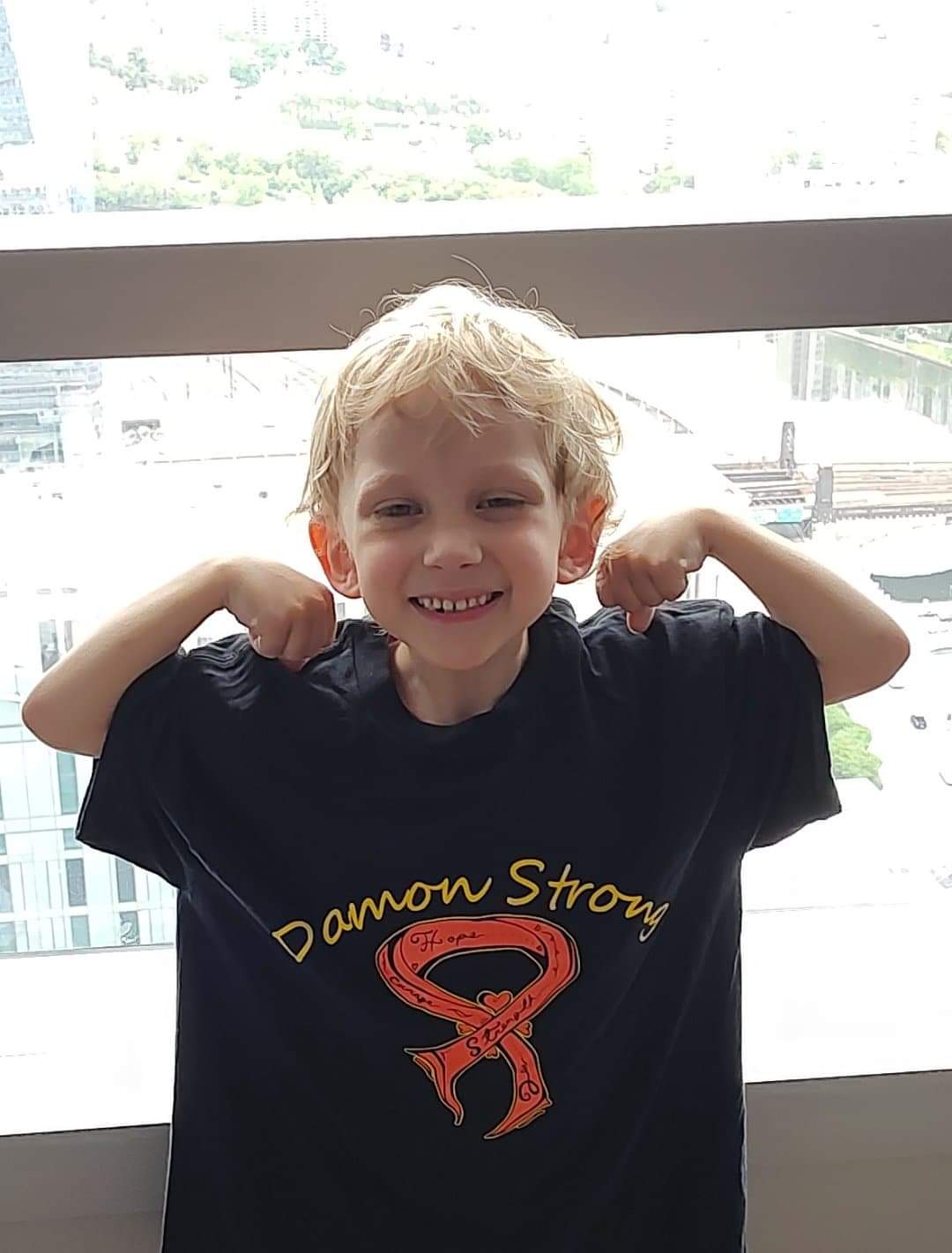 “Us cancer moms, we lose everybody but we need support. People don’t understand because he looks so good, I think, it doesn’t matter how he looks, he is going to die unless he gets the treatment he needs.”

Damon was diagnosed with Acute Myeloid Leukemia in July 2021; he was almost 5 years old. His mom, Carrie, after years of changes in employment, had taken her dream job as the manager of an Auto Shop; and his dad, Brian had just started his own painting company. Life felt more settled than it had ever been before.

Damon had been sick for a while but not with anything too alarming. Then one Saturday he collapsed and was rushed to hospital. The doctor told Carrie and Brian that Damon had leukemia and that he should have been dead or a coma. “Damon had experienced several health problems since he was born but never had any doctor told us that they could predispose them to cancer,” said Carrie. “I was angry about that.”

Damon would need to start chemo immediately and have surgery to insert the port. “I don't remember much besides holding Damon and talking with Brian. When I thought Brian was asleep, I finally broke down, I had just released a few tears here and there, but I hadn’t really processed or cried. A nurse came in and listened as I talked, probably making no sense. Then after 44 hours of being awake, I crawled onto Damon's bed and slept for a few hours like his puppy.”

“I have never left his side. I left my job, I got FMLA for a bit and after that I got unemployment. Brian tried to keep the company going, but it suffered an extreme loss last year, with him not able to be there a lot of the time. We are still unable to pay ourselves regularly, even having cut expenses. Our septic broke and our two vehicles broke down; it’s almost impossible when unexpected problems happen. Every dime helps us focus on Damon and off the fear of losing our livelihood. I'm grateful for so much, but I also look at the long road ahead and wonder how we will make it,” said Carrie.

In March, Damon was five days away from starting his bone marrow transplant, but the family got devastating news. Damon was no longer eligible.

The family is faced with impossible choices between a highly aggressive treatment which can result in severe and often fatal side effects, but can be highly successful, or a less risky treatment with lower success rates. For now, they are taking the less risky path and hoping for good results when Damon’s bone marrow is tested again. At the same time, they are having to dig up their yard to deal with the issue with their septic tank because hiring professionals is not financially viable. “Things that happen in general make people’s lives’ hard,” said Carrie. “When they happen on top of a cancer diagnosis, life becomes a terrible struggle.”

“The hardest point for me was probably between October and Thanksgiving 2021. Damon was, on the surface, a perfectly normal child. He was doing a low dose chemo which would normally be outpatient, but there was concern about his neutrophiles, he barely had an immune system. I was locked in the hospital with psychotic 5-year-old. He had insomnia, no visitors were allowed except for Brian. Damon would run up and down screaming all day and refusing to sit down.”

“The week that Damon was diagnosed I took a huge hit, part of you wants to die, but I sat there trying to look for positives. I had never been in a career that allowed me FMLA, if there was going to be a best time, that was the best time. We took a loan for our minivan and reduced some expenses; we were able to claim the company loss against our income. Those things helped a little.”

“Another mom told me about Pinky Swear and they paid our mortgage which allowed me to only pay utilities and a car payment that month. We spent $2000 in Philadelphia on parking, gas, food, everything we needed while we were there. At that point I reached out to all the organizations that I was aware of.”

“It helps a lot, the last thing anyone should have to worry about when fighting for their son’s health is money. I would sell and give up everything to cure our son but why should we have to? If I was diagnosed with cancer as an adult, I would automatically get an income. With Damon’s diagnosis, they look at our income and our house. The only thing we get is food stamps.”

“Us cancer moms, we lose everybody but we need support. People don’t understand because he looks so good, I think, it doesn’t matter how he looks, he is going to die unless he gets the treatment he needs.”

Pinky Swear Foundation hopes that Damon can get the transplant he so badly needs and that this family, at some point, can recover, but the road will continue to be very long.