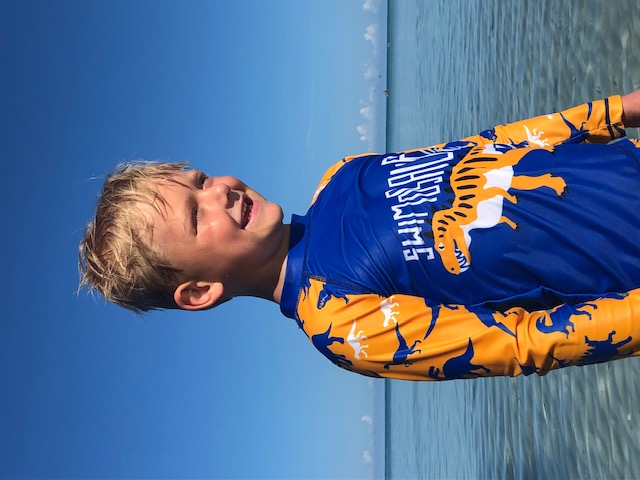 It was October 2020, and Kira noticed that the corner of Eli’s eye was swollen. Eli was prescribed an antibiotic. She half-jokingly said, “This isn’t a brain tumor or anything, right?”

“We were the all-American family,” said Eli’s mom, Kira. “We had just moved into town, our kids were involved in lots of activities, and we had an RV that we loved driving. Tom owns his own business, and I was earning a solid income as a massage therapist.”

It was October 2020, and Kira noticed that the corner of Eli’s eye was swollen. Eli was prescribed an antibiotic. She half-jokingly said, “This isn’t a brain tumor or anything, right?”

Then Eli started complaining that he had a headache; he also had a fever. The doctor told Kira to take him to the emergency room, which she thought was a bit much for an eye infection! When the doctor came in, she felt his glands, and stated, “This is a lymphoma. We need to life-flight him to a children’s hospital, now.”

“It was one of those moments when the oxygen felt as though it had been sucked out of the room and my blood had drained out,” Kira said. “I stood there wondering, ‘What just happened? How could she have diagnosed cancer simply by feeling his glands? Surely, they’re going to tell me they were wrong when they run bloodwork.’”

Before they knew what was happening, Eli and his dad were on a plane to Seattle and Kira was making the 11-hour drive. When Kira arrived, Eli was on a vent and had had surgeries to place his port, plus numerous other procedures.

“It felt surreal; 24 hours prior, he had been riding horses.”

Eli was in-patient for the first month of treatment. Tom returned to Montana to care for Evie, Eli’s sister.

“We were fearful about shutting Tom’s business down and him losing his clients; I wasn’t going to be working for years. We could see the financial implications ahead and bills were accruing quickly. We were in Seattle for nine months. We had planned our lives and future based off two incomes – two parents working.”

“I lived in the hospital. Tom flew out for a weekend with Evie. Flights were $800, a hotel room $140, and then there was food; that made for an expensive weekend. We were suddenly trying to maintain two households, and little expenses like toiletries began to add up quickly.

The social worker gave Kira a packet of information.

“I thought, ‘This is going to take forever.’ The Pinky Swear form was easy, though. They initially sent an Orange Envelope. At that time, gift cards and donations felt as though we had won the lottery. It was hard to ask for help as we had always proudly been self-supporting! Then Pinky Swear granted us a $500 award. That went a long way and goes toward the purchase of gas, food, and many of the extras that Eli needs. One of my super-powers is penny pinching. I can make those funds stretch! I felt like a monster worrying about money when our child could die; yet our dreams were flying out of the window. The fear was crippling for me. I had been having a wonderful life, and now I was stuck in Seattle with a child with cancer and a rapidly crumbling financial picture.”

Eli will remain in treatment until 2024. That means regular chemo and lumbar punctures. He also has a suppressed immune system which makes working difficult as Kira must work around his appointments, how he is feeling, and keeping him away from sick people.

“We don’t need stuffed animals; we need to stay ahead of our financial responsibilities,” she said.

Today, Eli is a beautiful seven-year-old who enjoys doing all the things that young boys do, but every month is nerve-wracking when Eli has bloodwork.

“He looks and feels good, but I experience high levels of anxiety of being blind-sided again. I know I must take things one day at a time, or actually one moment at a time. The lowest point was a day when Eli’s treatment was becoming significantly more intense. His nausea was relentless, and he was suffering immensely as he endured intramuscular injections in his legs three times per week. I was sobbing to the doctor and literally begging for support for him. She simply stated, ‘I’m not sure what you’re asking me exactly, Kira, but you’ll get through this.’ After she left the room, I recall laying on the floor, face down, not knowing how much more I could take and feeling helpless. Our life isn’t like that today, though, and I don’t know that we’ve had our high point yet. I remember thinking that all would be ‘normal’ once we returned home to Montana, but that hasn’t exactly been the case. This journey is a marathon, not a sprint, I believe our best days are yet to come.”