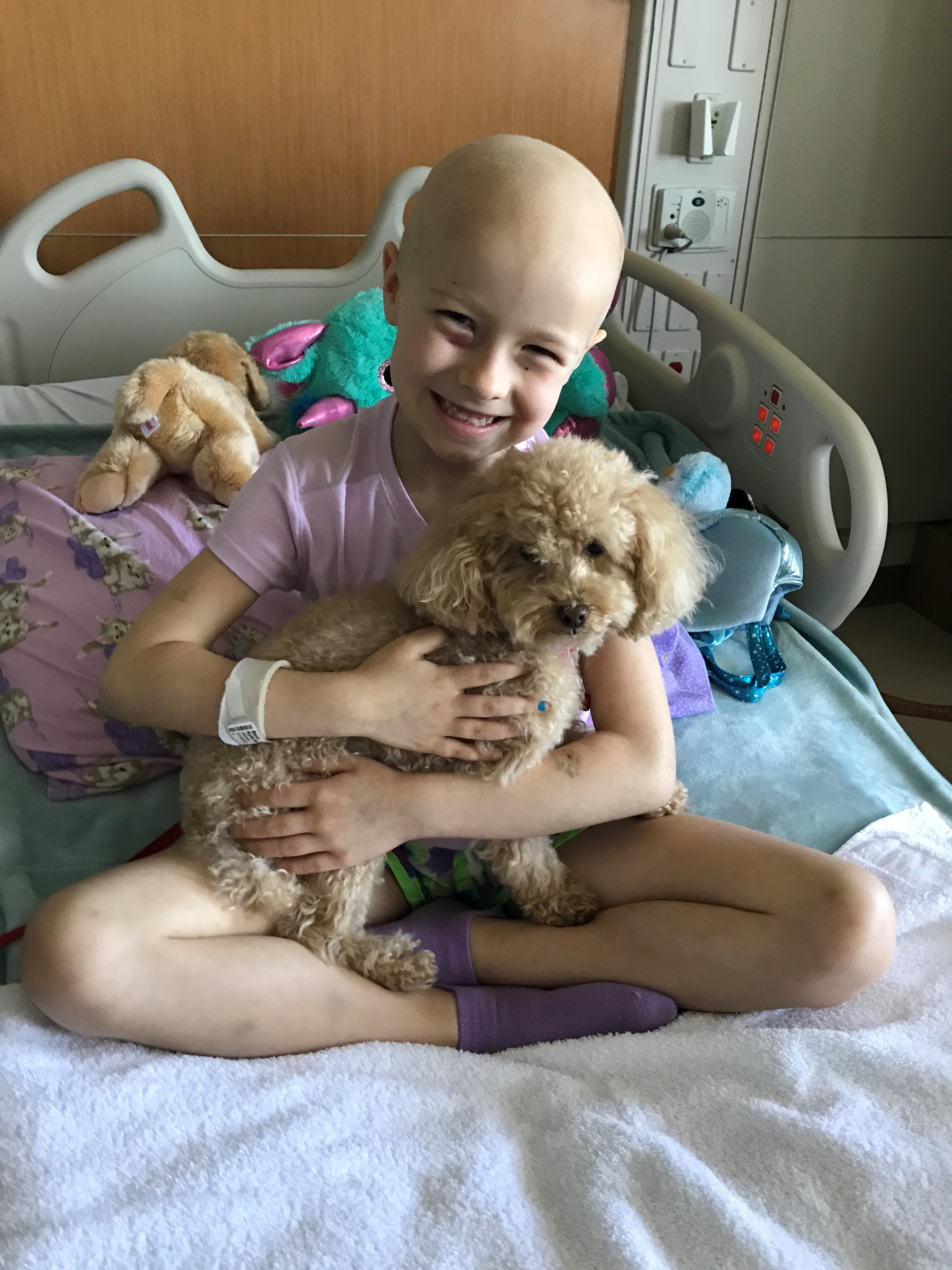 Kylie had Acute Myeloid Leukemia and started on five rounds of chemotherapy. For the first round, they spent about one month in the hospital. Then, they got to go home in between rounds of chemo forever watchful of Kylie’s immune system, which meant that she was susceptible to infection at any time.

Early in March of 2019, six-year-old Kylie’s parents brought her to urgent care due to symptoms similar to strep throat. She was diagnosed with strep throat and given antibiotics. After about three weeks of symptoms getting worse and with more symptoms including lethargy, multiple bruises, yellowing skin, and her not being her normal self, her parents took her into her pediatrician. They did some bloodwork and urinalysis, which showed that her white blood cell count was elevated, so much so that the machine couldn’t detect them.

“They said that they would have to send her blood to a different lab and let us know the results by end of the weekend,” said her Mom, Lisa. “The call came on Sunday morning telling us to go to Children’s immediately and to pack a bag. The emergency room was waiting for Kylie and within 30 minutes they told us that Kylie had leukemia and had to go into surgery to start treatment right away. We really had no chance to process this news; I was in complete denial. It took us a while to finally process this information and realize what was going on. They told us that there were organizations that could help, but at that point we felt that we did not need that.”

Kylie had Acute Myeloid Leukemia and started on five rounds of chemotherapy. For the first round, they spent about one month in the hospital. Then, they got to go home in between rounds of chemo forever watchful of Kylie’s immune system, which meant that she was susceptible to infection at any time. After round one, Kylie had a bone marrow biopsy showing that she still had some cancer cells. After her second round, she showed to be cancer free, but was given three more rounds of chemo to make sure that there were no cancer cells hidden. The family remained optimistic, relying heavily on God, their families, their community, and prayers.

“Me and my husband switched back and forth at the hospital,” said Lisa. “Kylie’s sister, Keira, was still in daycare and my parents, and Dave’s parents would come for a week or two at a time. I’m a chiropractor and worked less hours, but my work also was flexible if we needed. David didn’t work as much. At that time, he worked at Progressive as a Claims Adjuster, and they allowed him to be very flexible in his schedule which helped a ton. It did affect our income some.”

10 months later, in September 2020, Kylie was in for a regular clinic appointment to check her counts and the doctors saw that they had changed dramatically, which was a big indication of a relapse. They ordered a new bone marrow biopsy to confirm this.

“No, no, this is not happening is all that we could think. They didn’t say for sure in the clinic as they needed to send the results out. We got the news via a phone call from our oncologist, who called both of us with the results.”

Kylie had already had her central line taken out from her initial treatments, but unfortunately had to get a new one placed to start treatment. The second time things were different because of Covid; the nurses had masks, and only Lisa or David could be there with no outside guests, which was very hard for Kylie. They were only in there at Children’s for one month as Kylie went into remission for a second time. After that, she had to prepare for a stem cell transplant, which took place at Children’s Masonic in November 2020.

Kylie received umbilical cord blood from a donor. Everything went well and she had no major side effects.

“Of course, they tell you all the risks, but mostly they didn’t happen. Kylie thankfully had favorable results.”

As of June 2022, Kylie is doing well. She is able to do most things, is not on any medications, does gymnastics and was able to go to school for the whole of 2021.

“Kylie will be starting 5th grade in the fall, continuing with gymnastics and officially has no limitations,” explained Lisa. “We are so happy”.

“Our lowest time was when Kylie relapsed; we didn’t know what was going to happen. We knew multiple children that have either died or had serious complications from transplant. You have no control, all you can do is research to stay informed and stay true to your faith, knowing that everything is in God’s hand. You realize how great family is, that there are so many people in community willing to help, and how generous people are. When Pinky Swear helped us with a mortgage payment, our stress lifted; we didn’t have to worry about that that month. We found out that there are organizations there to give you money and/or experiences that can help through these tough times. It is not based off your bank account, they just want to help kids and families. When we told the social worker that we didn’t need help, she said that we may not think that now, but will later, we would need help more than we thought and she was right.”

At the beginning, Kylie had to stay in the hospital for five rounds of treatment, each lasting about one month, then she would come home for about two weeks in between. The family used a shared kitchenette area that was stocked with snacks, treats, and other goodies from the Pinky Swear Foundation.

“These little surprises meant a lot to Kylie and us as it would be a break from the hospital food and give us a taste of something different. Pinky Swear would stock these shelves for families like us and patients like Kylie every two weeks.”

“After Kylie was cancer free and finished with treatment, Pinky Swear blessed us with an All-Star Weekend where they paid for us to have a fun long weekend at a hotel near Mall of America. When our family had had to be apart for so long, it was nice to have a chance to be together, forget about it all, and just have fun.”

The family was so thankful for Pinky Swear Foundation’s help that they wanted to do something to help other families, and wow they did so much! They started a fundraiser at their church. They asked for food items and donations to Pinky Swear Foundation. They also asked for people to make cards for encouragement for families and children in the hospital.

The family was able to raise a huge $4,314 and collect a massive 127lb of food. Cards were also created including some made by Kylie’s sister Keira’s class. Through these amazing efforts, Kylie’s family were able to make a huge difference in the lives of kids with cancer and their families at a time when more and more families are struggling with rising gas and food prices.