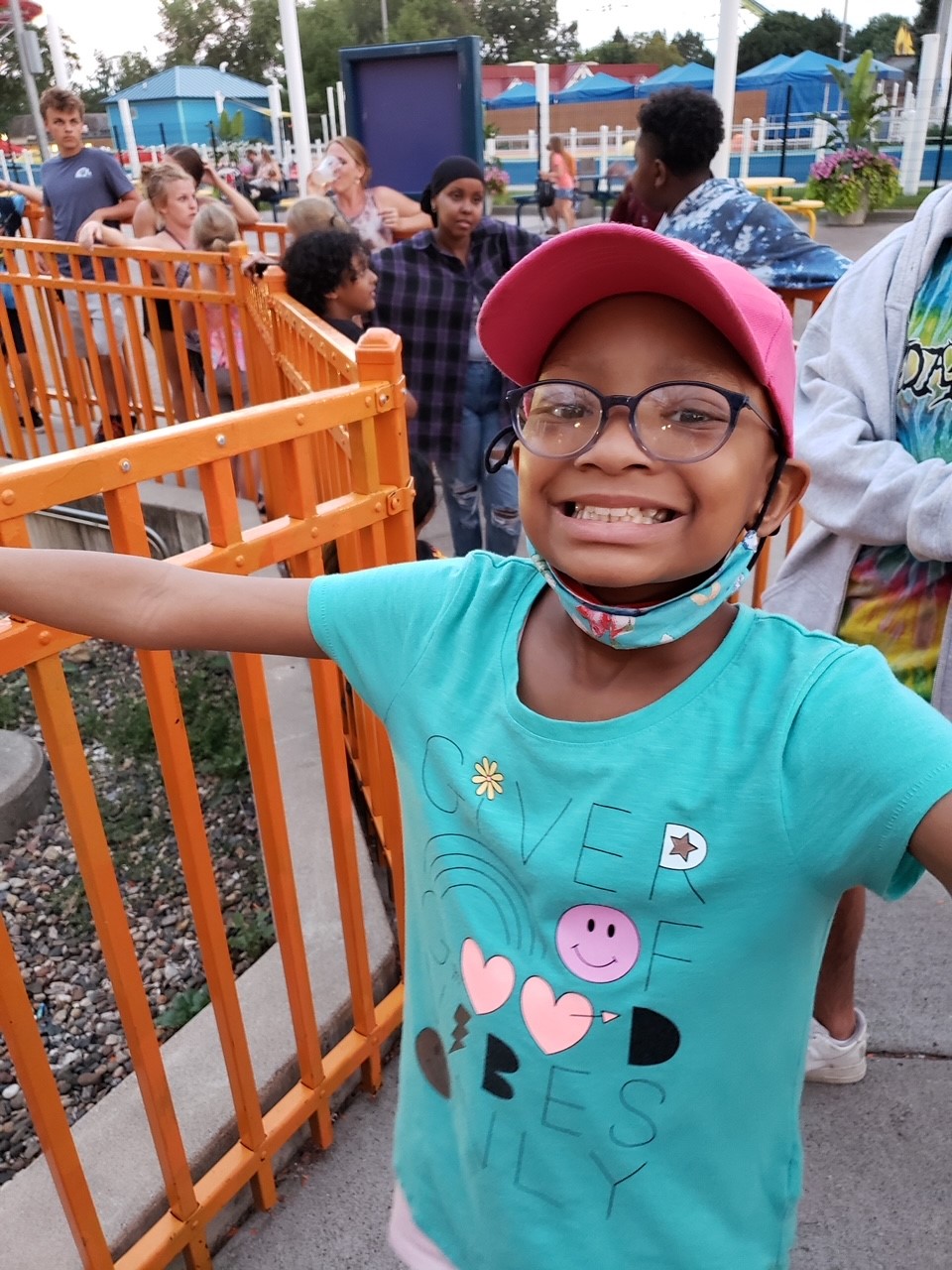 For the first seven or eight months, Terrance and Terrayah were back and forth to the hospital almost every day. There were constant tests and procedures, and sadly the tumor was growing fast. There was never any set schedule, but a 20-minute drive each way clocked the miles up on Terrance’s car, and there were frequent visits to the gas station.

Terrayah had always been a healthy child, but, in early 2021, she developed a bump on her leg. Her dad, Terrance, thought was a spider bite. Urgent care told them to come back in two weeks if it didn’t go down. She could barely walk and was in a lot of pain. Instinctively, because he had experience working with children in the hospital, Terrance started to worry that it was a tumor. They went to the hospital and were told that Terrayah had Rhabdomyosarcoma.

Terrayah’s mom passed away in 2018, and she lost her grandma in 2020. She has been through more in her short life than many people go through in a lifetime, and so had Terrance; he lost Terrayah’s sister in 2011.

“I could not believe it”, said Terrance. “… not another daughter was who is sick. All I could think is, why is this happening to her? I was blaming myself for the whole situation, wondering what I had done in the past to deserve this. I was also very concerned about the amount of pain that my daughter was in.”

The family was in the hospital for two months straight.

After the first week, Terrance tried to work when he could, but then it became too difficult, and he was off for four weeks trying to get everything situated. Thankfully, his employer was sympathetic at the outset, and Terrance tried his best to keep up with his work obligations by phone. He was extremely thankful that he was a salaried employee and he had health insurance.

For the first seven or eight months, Terrance and Terrayah were back and forth to the hospital almost every day. There were constant tests and procedures, and sadly the tumor was growing fast. There was never any set schedule, but a 20-minute drive each way clocked the miles up on Terrance’s car, and there were frequent visits to the gas station.

Terrayah soon had to undergo radiation treatment at the Mayo Clinic in Rochester, meaning that they had to find a place to stay there, and it was impossible for Terrance to work. The costs mounted up.

“It was a lot with meals, gas, hotels and not working. My mom had vouchers for a hotel one hour away, which we used sometimes just to save money. Usually, though, we stayed at a hotel downtown so I could get Terrayah walking to her appointments just to get some fresh air. This all happened during Covid, so Ronald McDonald wasn’t a viable option. Once you were in, you couldn’t leave at all. My daughter needed more than that.”

Terrayah went into remission in February, but sadly, in March, the cancer came back aggressively; she had relapsed.

There have been a lot of complications due to Terrayah’s compromised immune system; she had the flu, then Covid, then a number of bacterial infections, as well as a bout of food poisoning.

“Even today, I have had a horrible morning. I woke up to a flat tire; it almost exploded on my way to work. I was supposed to leave work early for her doctor’s appointment, but I already got there late. Just last week, the transmission on my truck went; that was $4,000. It’s done almost 300,000 miles. I would do it myself, but I don’t have time. We have to take it one day at a time, actually one minute or even one second.”

“We received the gift card from Pinky Swear while we were in the Mayo Clinic; it helped with gas and food. It was so expensive driving back and forth; even the cheapest accommodation breaks the bank. Just knowing someone is there to care about you means so much.

“We also received help from Pinky Swear with our rent on more than one occasion. My rent is $1,700 and is a sizeable proportion of my income. We have a two-bedroom apartment. The assistance provided so much relief. I had built a nest egg for us, but it just disappeared. I was saving for us to move into a house. The apartment was always supposed to be just temporary, but of course that hasn’t happened. Terrayah asks me every day, ‘Why can’t we just have a house?’ The medications are especially expensive, and I absolutely hate the beginning of the year when we haven’t met our deductible.”

“People tell me they don’t understand how I keep a smile on your face. When I walk in the door, I completely separate the two. I use work as my sanctuary, dealing with other people’s problems makes me feel better. What can I do? Terrayah, she’s a trooper, that’s one thing she has got from me.”

I just want to say, ‘Thank You.’ People don’t say it enough.

Unfortunately, Terrayah passed December 13. Her family is in our thoughts.