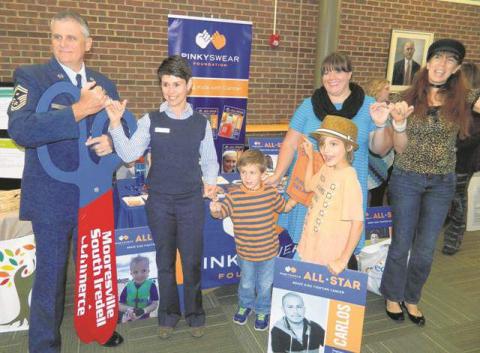 By NoahPosted on October 26, 2016October 15, 2020Cat UncategorizedLeave a comment

Area families facing a cancer diagnosis for their child are getting a helping hand from a nonprofit that “swears” to support “brave kids battling cancer.”

The Pinky Swear Foundation was established in 2003, when according to https://www.pinkyswear.org/charlotte, nine-year-old Minnesotan Mitch Chepokas, terminally ill with bone cancer, withdrew the entire $6,000 from his savings account and put it in envelopes for the kids on the pediatric oncology floor at the hospital to help them have a better Christmas.

“After giving away all of his money, Mitch made a pinky swear promise with his dad to always help children with cancer and their families after he was gone,” said the site. “Mitch passed away on April 11, 2003, and shortly afterwards, the Pinky Swear Foundation was established by Mitch’s parents, to honor the Pinky Swear (that) Mitch made with his dad.”

Catching up with North Carolina Area Director Sue Ratcliff at the event, she said that since the Charlotte chapter’s inception in December of 2014, they’ve assisted more than 70 families facing childhood cancer. In addition to North Carolina, the organization has spread to 46 states nationwide. The Charlotte chapter was the first one established outside of Minnesota.

“We’re here to support families in any way we can, in order to alleviate the stress that comes with having a child facing cancer,” Ratcliff said. “We’ve helped some families multiple times with their mortgage, gas cards for travel, and groceries while their child is in treatment, and we also offer respites for families who need quality time outside of the hospital.”

The foundation’s main goal is to “support the families’ quality-of-life with direct financial aid for basic needs, and through experiences that create emotional support.”

Ratcliff became involved in the foundation during its annual Pinky Swear Triathlon fundraiser, when her children participated. The event is a “non-timed and non-competitive race for kids ages six to 18,” that helps raise money to continue the charity’s mission.

“To see your own children so passionate about a cause was really touching, and that’s when the deal was sealed for me,” she said. “It’s been a wonderful experience, getting involved, and you really see the impact you have on these families.

I’ve built relationships with the families that we’ve helped, and they call me regularly to update me on how their children are doing.”

One of the Charlotte chapter’s biggest fundraisers, Alison Palmeter, said that she also began supporting the cause when her son participated in the triathlon.

“I think it’s a great cause, and it gives not only financial help, but hope to the families,” said Palmeter. “I also really like that it’s a cause my children can help support.”

Her sons, Jadon (12) and Eli (9), are “very passionate” about the cause, and recently helped raise $2,700 together for the foundation. Palmeter added that the Pinky Swear Foundation has been locally supported by NASCAR in a big way, and several drivers have assisted in fundraisers.

Other local events held by the Pinky Swear Foundation include the annual Orange & Blue Gala at Trump National Golf Club and the Goddard School’s Pumpkin Run, which this year benefitted one of their students, a four-year-old who was diagnosed with Acute Lymphoblastic Leukemia in June.

The next upcoming event for the Pinky Swear Foundation is a fundraiser at Mooresville’s Mainstream Boutique, hosted on Nov. 1, from 6 p.m. to 9 p.m. 15 To Fit Pilates, Health of Knowledge and Ain’t Miss Beadhaven will also be on hand for an evening of “shopping, fitness, wine, food and a lot of fun all for a great cause.”

To find out more about the Pinky Swear Foundation, contact Sue Ratcliff by calling 704-808-0123 or by emailing at sue.ratcliff@pinkyswear.org. Information can also be found at https://www.pinkyswear.org/charlotte.